Can’t We All Just Get Along? What Psychology Tells Us About Political Gridlock

LiveScience: The U.S. government is broken. That is how Diane Halpern, a cognitive psychologist at Claremont McKenna College in Claremont, Calif., opens her talks on the psychology of political partisanship. The divisions between the Republican and Democratic parties are so pronounced and polarized these days that Halpern says the current More

Explain This: The Illusion Of Political Understanding

NPR: Should the United States impose unilateral sanctions on Iran for its nuclear program? Should we raise the retirement age for Social Security? Should we institute a national flat tax? How about implementing merit-based pay for teachers? Or establishing a cap-and-trade system for carbon emissions? Plenty of people have strong More 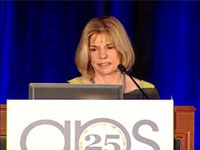 How to Fix a Fractured Nation

2013 APS Award Address: Diane F. Halpern from Psych Science on Vimeo. If you’re a staunch conservative, make friends with an MSNBC fan. If you’re a liberal, watch Sean Hannity once in a while. These were among several solutions that psychological scientist Diane Halpern of Claremont McKenna College recommends as More

The Boston Globe: Do you have a strong opinion about Obamacare? Great. Now, please explain how it works. If that question gives you pause, it might also serve a purpose: A new study suggests that the intense political polarization affecting this country depends on ignorance, and that drawing our attention More

Hail to the Narcissist: POTUS And Personality

The Huffington Post: Looking back on U.S. history, certain presidents clearly stand out as larger than life. Andrew Jackson, TR, LBJ — these were flamboyant and domineering men, and also great leaders. Some might quibble about who among these had the biggest personality, but no one would put Calvin Coolidge More

Supporters of a political measure are more influenced by their initial preferences than cold, hard evidence suggesting that the measure won’t go their way, a study shows. More