A sample of new research exploring the neural representation of interpretive frameworks, motor planning for joint action, and the influence of attention on spatial resolution. More

Yours or Mine? How We Handle Objects Depends on Who Owns Them

From scissors and staplers to car keys and cell phones, we pass objects to other people every day. We often try to pass the objects so that the handle or other useful feature is facing the appropriate direction for the person receiving the item, but new research shows that we’re More 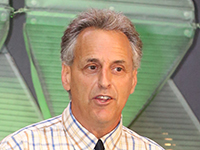 William James Fellow Award Address recorded May 2016 in Chicago at the 28th Annual Convention of the Association for Psychological Science. More

If You’re Happy and You Know It, Raise Your Head

The Atlantic: Shortly after Steven Livingstone arrived at McGill University, he went out to a bar with some new friends to check out the Montreal nightlife. It was loud, and crowded, and dimly lit, and he found himself struggling to hear when one of his friends tried to talk to More