When it comes to how we value money, all dollars (or Euros or yen or pesos) are not created equal.

If someone gives you three dollar bills and then offers a fourth, the prospect of getting that extra dollar is kind of exciting. But if someone offers you 33 dollar bills first, the additional dollar loses some of its luster.

Psychological scientists Dan R. Schley and Ellen Peters of The Ohio State University speculated that the DMU function might vary from person to person depending on how they perceive and map numeric values in general. 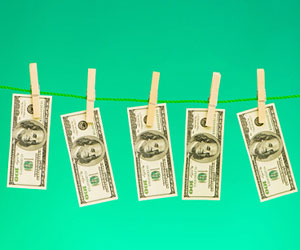 Researchers believe that these differences stem from the fact that we have inexact internal representations of magnitude which result in inexact mappings to symbolic numbers.

With this in mind, Schley and Peters hypothesized that the exactness of the symbolic-number mappings may play a role in how people value money — a person who has more exact mappings would, therefore, show less diminishing marginal utility (and a more linear value function) than a person with inexact mappings.

The researchers conducted an online survey with 76 participants. In one part of the survey, the participants were asked to say how far they would be willing to drive round-trip for a given dollar amount (how far for $30, $5, $100, etc.), assuming they had a car, a driver’s license, car insurance, and free gas. In this way, the researchers were able to determine the shape of the value function for each participant.

Another part of the survey was designed to gauge the exactness of participants’ symbolic-number mappings. Participants were shown a 102-mm horizontal line, anchored by 0 on the left and 1000 on the right. The participants were presented a series of numbers — for each number, they had to click on the line to indicate where that number falls.

These findings were confirmed in a second study.

“Although humans are capable of tremendous feats of intellect, our judgments and decisions reflect and build on an evolutionary past that allows us to represent approximate quantities,” Schley and Peters write. “Choosing on the basis of inexact mappings of symbolic numbers to mental magnitudes is likely sufficient for most decisions (and may maximize decision quality in some cases), but may be inadequate for some more complex everyday judgments and decisions.”

That is, inexact symbolic-number mappings may explain, at least in part, the seemingly irrational decisions we make with money, such as avoiding risk and discounting future rewards.

The findings “add to the growing call for improved mathematics education, including training aimed at improving the accuracy of symbolic-number mappings,” the researchers conclude.

Publications > Observer > Observations > What’s the Value of a Dollar? It Depends on How You Perceive Numbers