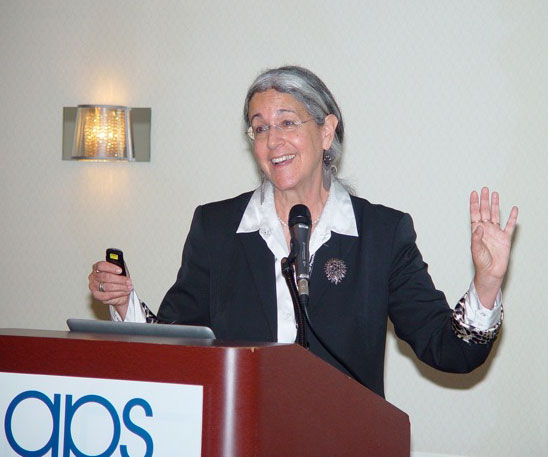 Varda Shoham at her SSCP address at the APS 23rd Annual Convention.

In discussions of psychological research, the independent variable is not often referred to as “elusive.” Why, then, would it be elusive in psycho-social intervention research? In her SSCP address at the APS 23rd Annual Convention, Varda Shoham, of the University of Arizona and NIMH, answered just that. Treatment fidelity, influenced by the therapist, contributes significantly to treatment effectiveness. Without this fidelity, outcome measures inevitably reflect variations in treatment implementation rather than the intended treatment. So, what leads to treatment variation? In some instances, training and dissemination of therapies are not optimal. In others, therapists simply do not implement a given therapy even when they have been trained.

Ideally, then, researchers should strive to understand the essential elements of theory-driven, outcome-producing therapies, thereby enabling a paring-down of complex or unattractive treatment protocols and a better understanding of moderating variables in order to arrive at simplified, attractive, and effective treatments.

Shoham shared her own experience with an unfortunate research outcome: a novel treatment protocol showed no effect. This is, of course, every researcher’s nightmare. However, once exploration of treatment fidelity began, she learned that very few therapists in the study were implementing the treatment with high fidelity, and, in fact, of the small percentage who did, the treatment had a positive effect! This promising information could have been entirely missed had treatment fidelity not been evaluated.

Given the clear importance of ensuring treatment fidelity and understanding the essential components of empirically supported behavioral treatments, a new grant opportunity is available. Due June 20, 2011, RFA-MH-12-050, is a R21/R33 to improve the science behind enhancing and maintaining fidelity. Shoham hopes that a recursive model of intervention research will lead to more effective community-setting interventions, with implementation and dissemination of services continuously informing further research and treatment development.