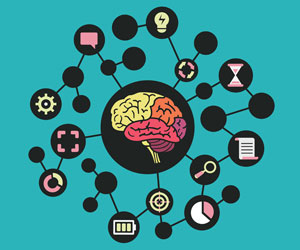 A new study shows that as science, education, and technology have taken on prominent roles in society over the past two centuries, the frequency of cause-and-effect language used in English texts has also increased, suggesting links between culture and cognition over time.

Led by University of Michigan researcher Robert Axelrod and Rumen Iliev, a former University of Michigan postdoctoral researcher, the study builds on previous studies that link cognitive processing to cultural and societal factors. Unlike previous cross-cultural work that compared different cultures at the same point of time, this project focused on comparing the same culture at different time points.

Traditionally, the researchers of culture and cognition have assumed that cross-cultural differences can be traced back to ancient times, yet there has been very little empirical work on the timeline of such changes.

“The increased attention to causality in western society isn’t surprising given the increasing role of formal schooling, popular science and everyday technology,” Axelrod said. “What was surprising was that we were able to empirically verify this hypothesis, even in the absence of direct psychological measures.”

Axelrod and Iliev used a dictionary of causal language developed by James Pennebaker of the University of Texas to test the hypothesis that the increased role of education, science, and technology in western societies should be accompanied by greater attention to causal connections. The dictionary included words such as “because,” “since,” “hence,” and “why.”

In one study, they used Google Books, New York Times, and Scientific American databases to compare the frequencies of causal words in English-language texts across time. Together, the three databases spanned a period from 1800 to 2015. The researchers found that the frequency of causal language increased by about 40 percent over the last two centuries, with most of that increase occurring in the 20th century.

To ensure that the increase found in the first study was due to increasing interest in causality and not just shifts in the vocabulary used to discuss causation, Iliev and Axelrod conducted a second study focused on two groups of texts.

They compared 28 texts written by the most influential historical thinkers who had worked on causality, such as Thomas Aquinas, Isaac Newton and Rene Descartes to another group of 32 texts written by English language authors who worked before the 20th century, such as Jane Austen, Herman Melville and Charles Dickens.

The texts studied were obtained from Project Gutenberg, which provides digital copies of public domain books. The causal dictionary was able to differentiate between the two groups of authors, suggesting that the observed quantitative change could not be attributed to a semantic shift in the meaning of the causal words.

“Our research also sought to demonstrate the value of automated text analysis as a tool for cultural changes over time,” said Iliev, now at Stanford University. “New technologies are allowing us to empirically address scientific questions, which we could have only speculated about until recently.”

A sample of new research exploring eye-tracking and causality, acquiescence to intuitive judgments, out-group prejudice and pathogen concern, and an intervention focused on executive function skills in preschoolers.

A sample of new research exploring educational achievement, personality, and genetics; how multidimensional objects are stored in memory; and categories and constraints in causal perception.