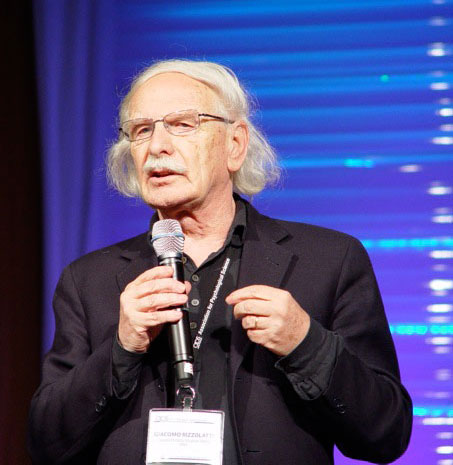 Keynote Speaker Giacomo Rizzolatti of the University of Parma, in Italy.

In his keynote address at the APS 23rd Annual Convention, Giacomo Rizzolatti of the Università degli Studi di Parma, Italy, gave a brief history of the mirror mechanism. In general terms, the neurons that form the basis of this mechanism fire when a person executes an action as well as when he or she perceives it. If anyone is qualified to describe the evolution of this field of study, it’s Rizzolatti, whose laboratory discovered the connection in the late 1990s while studying monkeys.

To demonstrate the mechanism in action, Rizzolatti played a video of one of his laboratory’s first mirror neuron studies. In the first scene, a monkey grasped a food item, setting off a staccato burst throughout the laboratory. The sound reflected the monkey’s brain activity while it performed the grasping action. In the next scene a researcher made the same grasping gesture as the monkey watched — and, sure enough, the exact same staccato noise filled the room, even
though the monkey was no longer performing the action directly.

“Here is the mirror effect,” Rizzolatti said. “When I see a person doing something, this same action this person performed entered inside my motor system and I have a copy of it.”

The mirror mechanism may be critical to “action understanding,” Rizzolatti says, but it is not limited to it. Mirror neurons reflect emotions as well. In one study he and his collaborators placed people in a brain scanner and introduced an odor of rotten eggs. The researchers then presented the participants with images of disgusted faces. Sure enough, says Rizzolatti, the same brain areas became active — showing the link between feeling an emotion and seeing one displayed.

Similarly, the mirror mechanism has a place in recognizing intention: brain activity shows that a child can recognize when someone intends to bring a chocolate to the mouth well before the action is completed. When the researchers tried to duplicate this finding with autistic children, however, they could not. “Autistic children do not have this copy of the motor activity that typically developed kids have.”

For more on mirror neurons check out:

Why is it that when we see someone doing something, specific neurons are activated in our brains – as if we were doing it too? For years, researchers have tried to understand the exact role that mirror neurons  play in human behavior. In the July 2011 issue of Perspectives on Psychological Science, a team of eminent mirror neuron researchers addresses how the mirror neuron system might support processes as diverse as speech and language, social interaction, autism and more.