Most Americans think of musical pitches as being “high” or “low.” But this height metaphor isn’t universal — some cultures use “thin” and “thick” or “light” and “heavy” to describe musical pitches. 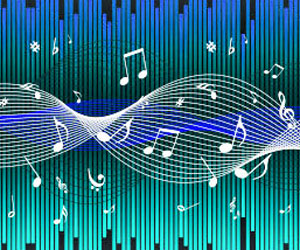 Daniel Casasanto of the New School for Social Research in collaboration with Sarah Dolscheid and colleagues at the Max Planck Institute for Psycholinguistics presented Dutch- and Farsi-speaking people — who use different musical pitch metaphors — with musical tones of different pitches. The tones were accompanied by images on a computer screen: horizontal lines that varied in how high or low they were placed on the screen, or vertical lines in the middle of the screen that varied in thickness. After each trial, the participants were asked to sing the tone they heard.

The researchers found that visual stimuli that matched the participants’ linguistic metaphors changed their perception of pitch, but had no effect for participants who used a different metaphor.

The researchers found that the association between the metaphors and musical pitches holds even if the participants are prevented from using the words themselves.

Dutch participants could be trained to use the Farsi metaphor, and they produced pitches as if they had been using the thick/thin metaphor all their lives.

The researchers conclude that the low = thick and high = thin associations might be innate in humans, or could be learned from physical experiences very early in life: Another study revealed that even before children can talk they respond to associations between pitch and height and between pitch and thickness.

These findings indicate that people who use different metaphors for musical pitch think about pitch differently, even when they’re not using language — yet there may be underlying associations between space and musical pitch that we all share.