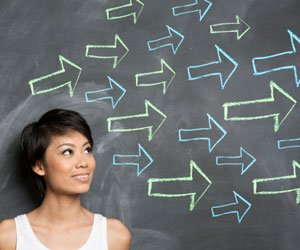 We often use words related to space to talk about time, describing the order of events in terms of “moving forward,” “looking back,” “thinking ahead,” and “lagging behind.” In fact, research suggests that people typically think about events on a timeline that right from left (past) to right (future).

But is the ability to mentally represent space necessary for representing events on a mental timeline?

Researcher Lera Boroditsky and colleagues decided to investigate this question by looking at mental representation of time in participants who had suffered strokes to the right hemisphere of the brain.

Importantly, the strokes led some of the participants to show signs of spatial neglect, a “severe disturbance in the ability to detect, identify, and move toward objects or events in the [left] side of space.”

Participants who showed left-hemispatial neglect were able to recall and identify fewer stimuli relating to the past than did healthy patients and stroke patients without neglect. Furthermore, they were not able to correctly recall or identify as many “past” items as belonging to the past.

They were not significantly worse, however, at recalling or recognizing “future” items.

Together, the findings indicate that patients with left hemispatial neglect have relative difficulty representing past events, those we would typically imagine as falling on the left side of a mental time line.

In combination with other work that has shown other temporal deficits in patients with left hemispatial neglect – such as impaired processing of temporal dynamics and difficulty directing attention in time – the data “converge to suggest that some neural substrates (e.g., in posterior parietal cortical areas) are shared for the representation of external spatial information and the representation of temporal information.”

When the field is ready to do the bedrock research necessary for generalizable psychological science, it will have to confront the inconvenient realities of where the science must take place.