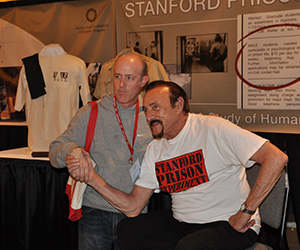 Hundreds of people gathered in the APS Exhibit Hall to meet the scientist responsible for one of the most famous psychology experiments of the 20th century. The line was long, stretching down one side of the huge room and winding around a corner, but APS Fellow Philip G. Zimbardo’s admirers were not deterred.

Zimbardo’s 1971 Stanford Prison Experiment is famous in the social psychology literature and beyond. By placing college students in a made-up “prison” environment and assigning them to serve as either guards or inmates, Zimbardo found that a power imbalance — even one created as part of a simulation for a university experiment — could lead to extreme abuses among the powerful and depression-like responses among the powerless.

Artifacts from Zimbardo’s famous experiment — including original uniforms, a billy club, and sunglasses — were put on display by the University of Akron’s Center for the History of Psychology (CHP), an institution dedicated to preserving “the historical record of psychology and related human sciences.” This effort includes managing historical archives and operating a museum.

This isn’t the first crowd-pleasing historical artifact that the CHP has brought to an APS Convention: Albert Bandura’s original “Bobo doll” came to Chicago for APS’s 2012 Convention, and Stanley Milgram’s “shock box” was on display at APS’s 2013 Convention in Washington, DC.

Visit the Center for the History of Psychology online at www.uakron.edu/chp.