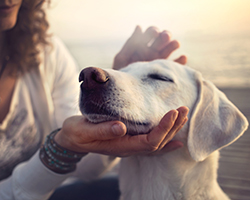 Dogs are one of the most common household pets in the world, so it’s curious that we know relatively little about their cognitive abilities when we know so much about the abilities of other types of animals, from primates to cetaceans. Over the last couple decades, researchers have been aiming to bridge this gap in scientific knowledge, investigating how our canine companions behave and what they know and why.

The October 2016 issue of Current Directions in Psychological Science is a special issue dedicated to exploring recent findings by psychological scientists about dog behavior and cognition.

“Although Pavlov’s classic work on conditioning was conducted with dogs, since then most research with animals has been done primarily with rats, pigeons, and primates (including humans),” notes special issue editor and APS Fellow Thomas R. Zentall of the University of Kentucky in an introduction to the special issue. “The reason for this shift in experimental subjects can be attributed to a number of factors, including the issue of keeping them housed in cages, and although dogs are generally quite available as companion animals, researchers have been reluctant to have to deal with the large range in breed characteristics, experience, and age.

“Although dogs had not been considered worthy of research for their own sake for many years, the situation has changed dramatically in the past decade,” write Gregory S. Berns, Emory University, and Peter F. Cook, New College of Florida,
Sarasota. “There is now a veritable renaissance in canine behavioral research.”

“Bringing these scientific practices to bear on canine cognition will have huge advantages,” researchers Rosalind E. Arden (London School of Economics and Politics, United Kingdom), Miles K. Bensky (University of Illinois at Urbana–Champaign), and Mark J. Adams (University of Edinburgh, Scotland) write in their review of 105 years’ worth of canine research. “We have an immense amount to learn from these captivating animals. Let’s go to the dogs.”