Observer > 2013 > July/August > Orchestras Without a Conductor 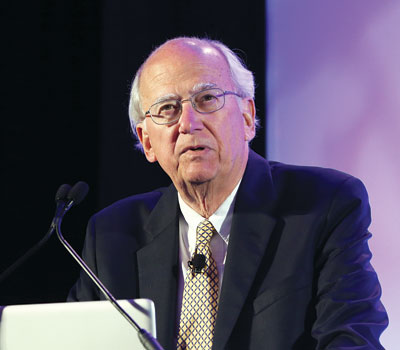 Keynote speaker Michael S. Gazzaniga, University of California, Santa Barbara, describes the mind as a cluster of various modules, each doing its own thing. The study of how these modules interact should keep scientists busy for years to come, he says.

A conductor standing with hands at his sides while the orchestra performs a flawless symphony — that’s how the brain works.

At least, that was the metaphor offered by Michael S. Gazzaniga of the University of California, Santa Barbara, in his keynote address at the 25th APS Annual Convention. Gazzaniga argued that the brain’s specialized regions may converse with each other rather than take direction from one primary leader.

“Maybe the brain is full of local interactions that are simply coordinated in some way,” he said.

Gazzaniga has been studying the distinct roles of the brain’s left and right sides for half a century. The APS past president is famous for his research on split-brain patients — individuals who have had their corpus callosum, the plate of nerve fibers connecting brain hemispheres, severed through surgery. This pioneering work revealed, among other things, that the left side of the brain controls language and verbal processing while the right side governs creativity.

Over time it became clear that left and right weren’t the only brain divisions. On the contrary, brain activity was found to be modular, with various cognitive tasks linked to specific regions. There was a clear adaptive explanation for this type of structure: it allows certain modules to change their function and focus without disrupting the whole system. Still, there was the lingering question of how these regions interacted.

“The question has been: Are they directed?” Gazzaniga said. “Is there a conductor in there telling which module to fire, which to go in front of the other? … Or does it just run?”

Gazzaniga believes the answer may reside in a process called “self-cueing.” During the cueing process, various parts of the brain prompt each other toward the solution to a particular problem. This operation creates a sort of neutral support network guiding brain functions around cognitive deficits or damage.

“It turns out cueing is probably a major activity of our brain going on all the time at many levels,” he said.

Gazzaniga received an early glimpse of this self-cueing process in action by observing a split-brain patient called D.R. When researchers asked D.R. to make various hand motions — an “A-OK,” a hitchhiker’s sign, a screwdriver motion — she had no problem doing so with her right hand, since that hand is controlled by the left hemisphere, where linguistic processing occurs. The left hand, meanwhile, struggled to perform the motions.

Eventually Gazzaniga and colleagues realized that D.R.’s left hand could only succeed by copying the right hand. In other words, when the right hemisphere couldn’t process the request on its own, the self-cueing process took place to offer some assistance. When the researchers asked D.R. to close her eyes, blocking any visual cues, her left hand failed the task completely.

Further insight came from working with patient J.W. During one experiment, Gazzaniga and colleagues flashed the word “Texas” to J.W.’s right hemisphere. Since the left hemisphere couldn’t process the word, J.W. was unable to read it back to the researchers. When they asked him to draw a symbol of whatever he’d seen, however, he sketched out a cowboy hat. With the help of this cue, J.W. ultimately recalled the original word, “Texas.”

Initially, these demonstrations astonished Gazzaniga and company. They had assumed any information presented to the left hemisphere could not be transferred over to the right hemisphere in anyone whose corpus callosum had been removed. What they discovered, however, was that split-brain patients could practice this sort of “20 questions” self-cueing exercise and eventually pull the brain’s divided modules closer together.

“All these sub-units figure out a way to communicate with each other,” said Gazzaniga, “and that’s how our story gets told.”

So what makes it so difficult for people to believe that our brains may work “more by local gossip than by central planning?” in Gazzaniga’s words. He suspects it might have to do with the left hemisphere’s tendency to weave a seamless narrative from fragments of information — something he calls the “interpreter.” Since people generally aren’t aware of their own modular brain, they’re inclined to imagine that some master “self” is behind the controls.

In any event, said Gazzaniga, understanding the biological and cognitive mechanisms at the core of modular interactions should keep scientists busy for years to come.

He and some colleagues have been examining the mystery with the help of neuroimaging technology. In one recent study, published in a 2012 issue of Proceedings of the National Academy of Sciences (PNAS) by Doron, et al, the researchers flashed words to healthy people and asked them whether or not what they’d seen was a real or nonsense word. As the tasks were performed, a machine recorded activity on both sides of the brain.

When words were presented to the left hemisphere (again, where language processing resides), all the activity occurred on that side. As a result, the brain quickly determined whether or not a particular word was genuine. When words came into the right brain, however, significantly more connections took place as the task was transferred over to the left side — “highlighting the underlying dynamic nature of brain communication,” according to the PNAS report.

Simply put, the mind works without a conductor, Gazzaniga concluded. Instead, it’s a cluster of various modules, each doing their own thing. The cueing process creates the appearance of unity, but just how this local chatter gets coordinated remains to be known.

“So to conclude my metaphor,” said Gazzaniga, before turning on a clip of Leonard Bernstein standing motionless while his orchestra performed, “let the modules play.”

Observer > 2013 > July/August > Orchestras Without a Conductor