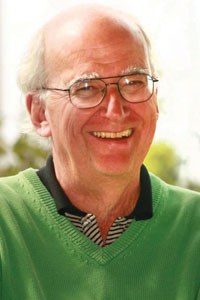 A few minutes into his talk at the APS 23rd Annual Convention, APS Past President Michael Gazzaniga, now a professor of psychology at the University of California, Santa Barbara, clicked to a slide titled “Role of Neuroscience in the Law.” Then he revealed a bullet point that read: “It is of little or no immediate use.” Several people in the audience giggled. Sometimes Gazzaniga gives this talk to lawyers, he says, and this is the part where he loses them. “Lawyers are practical people [who think] ‘I can’t use it? I’m out of here,’” says Gazzaniga.

But psychological scientists can’t afford to walk away, says Gazzaniga, who was the Psi Chi distinguished speaker at the 2011 APS convention. As founding Director of the MacArthur Law and Neuroscience Project, he says neuroscience may not be of any practical use in the courts right now. But in the next few decades, Gazzaniga believes this situation will change. Neuroscientists will discover more about how the brain works and, inevitably, legal questions will arise. Does a particular pattern of activity on a functional image of the brain mean an individual accused of a crime wasn’t in control of their brain? If the brain works automatically, through cells that communicate with sparks of electricity, then do people still have free will? “It is a topic that everyone in this room is involved in and should be involved in and should think through for yourself,” Gazzaniga says. “I’m trying to lay out a landscape for you to consider these questions on your own terms.”

Gazzinaga considers many of these questions in his book Who’s in Charge?: Free Will in the Science of the Brain (Ecco Books, to be released November 2011). According to Gazzinaga, the fundamental problem is that brains arise from biological activity. People are comfortable knowing their cells are automatic and interact in a particular way; it’s not disturbing to people that mitochondria make energy, DNA is unwound, and proteins carry signals. But people get uncomfortable when this logic is extended to the brain. “It makes it sound almost like we’re along for the ride,” Gazzaniga says.

But, he also says, the truth is more complicated. Take the famous example of Phineas Gage, the railroad construction foreman whose left frontal lobe was destroyed by an iron tamping rod. The injury didn’t kill him, but it changed his personality for the worse. Evidence has been found that left frontal lobe lesions disinhibit behavior and can make people more violent.

It’s easy to see how a defense lawyer could use this evidence to argue that a defendant wasn’t responsible for his actions. But Gage wasn’t violent, and neither are many people who have had injuries to their left frontal lobes. According to Gazzaniga, the damage doesn’t automatically turn people violent. “Such lesions do not flip a switch,” he says. So it’s not enough to blame a person’s actions on a deficiency in their brain.

Researchers have learned a lot about the brain through functional imaging, which can be used to find out what parts of the brain are active while a person is thinking about a particular thing. So it might be tempting to take a functional MRI of a defendant’s brain and see whether their brain functions normally. But that approach doesn’t make scientific sense, Gazzaniga says. Studies are based on averaged measurements collected from multiple brains. If you look at individual brains in a study, there may be very different patterns of activity. That means it’s not possible to compare one brain to the average and claim that that a person’s mind doesn’t work right.

Even if scientists do find consistent differences between the brains of criminals and people who don’t commit crimes, it’s not clear what those differences mean. The problem ultimately comes down to the millennia-old debate over free will and determinism, Gazzaniga says. Do we have control over our actions or are our actions the result of outside forces? If the determinists are right and our brains function like machines, then punishment isn’t appropriate. The correct response to a broken machine isn’t to punish it — although it may be tempting — it’s to fix it. Past research studies have even found that people who don’t believe in free will impose lighter punishments.

Even though we believe cells are automatic, it is hard to accept the mind is too, Gazzinaga says. Instead, he offers a different perspective: He compares cells to cars. No matter how much you know about cars, the inner workings of the alternator are never going to explain traffic patterns in Hong Kong. The same way that traffic comes from the interactions between cars, Gazziniga says, responsibility comes from the interactions between people. If you’re the only person in the world, then there’s no social contract and no need to be responsible. He says, “All of us are capable of following rules and we should maintain that and, I think, hold every person responsible for their actions.”