APS Fellow Robert L. Goldstone will begin a 4-year term as Editor of Current Directions in Psychological Science on January 1, 2020. Goldstone is Distinguished Professor and Chancellor’s Professor, Psychological and Brain Sciences, at Indiana University Bloomington, where he directs the Percepts and Concepts Laboratory. His research focuses on concept learning and representation, perceptual learning, collective behavior, and computational modeling of human cognition. He has served in editorial roles with many other journals, including the post of Executive Editor of Cognitive Science. He received the Troland Research Award from the National Academy of Sciences in 2004 and was elected to the American Academy of Arts and Sciences in 2016. Goldstone recently answered some questions about his plans as the journal’s editor. 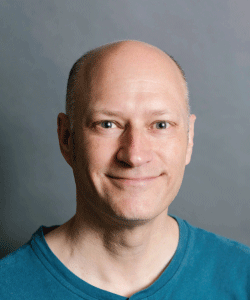 Current Directions is prized as a showcase for the latest developments across the full spectrum of psychological science. What are the challenges in trying to keep tabs on such a diverse field?

There’s no way that any individual psychologist can hope to stay abreast of all of the exciting developments in the many-tentacled life form that psychological science has become. One of my strategies for coping with psychology’s multidirectional growth will be to attend broad conferences like the APS Annual Convention and meetings of the American Association for the Advancement of Science, Society for Research in Child Development, British Psychological Society, Society for Experimental Social Psychology, American Educational Research Association, Cognitive Science Society, European Federation of Psychologists’ Associations, and International Congress of Infant Studies and noting researchers there who have a knack for communicating their research to a general audience. Perusing databases of national grants awarded and institutional schedules of psychology colloquia offer other ways of finding researchers adept at making research broadly accessible.

Some of Current Directions’ most memorable and popular issues have been its special issues—past topics have included Psychology and the Law, the Teenage Brain, and Cognition in Dogs. Can you give us a preview of some of the special issue topics you’re considering?

The goal of a special issue vehicle would be to create cross-article connections and increase the visibility of individual articles by packaging them together as part of a larger “movement.” Some possible topics to consider exploring are bilingualism, new treatments for self-harm, neural prostheses, messaging campaigns for changing people’s long-term energy-use patterns, children’s learning from old and new media sources, influences of social media on motivation, causes and effects of changes in eating patterns, trust in information sources, sense of belonging and age, factors contributing to suicide rate increases, prospects for “mind reading” with new neuroimaging technologies, life purpose in an era of increasing robotic labor, crowdsourcing as a citizen science approach to psychology, and what theories of human learning can learn from machine learning and vice versa. One special issue I would like to pursue soon would explore how the many new devices that are measuring, logging, analyzing, and assessing our behavior end up influencing our psychology. Citizens of the modern technological world are all living extremely “well measured” lives, courtesy of technologies such as Facebook, Fitbit, sleep monitors, Google Scholar, Apple’s Health app, Strava, Twitter, GPS, 23andMe, Luminosity, PatientsLikeMe, Spotify, and Amazon. Like it or not, we are all participating in a large-scale social experiment on the effects of technologies whose rapid development has outstripped our understanding of their consequences. I would like Current Directions to be part of a discussion on how these technologies should best be used, and whether they are being developed in a way that promotes the public good.

Recognizing that Current Directions articles are largely invited, what advice do you have for authors who want to propose topics for your consideration?

I am an avid reader of Current Directions, and greatly appreciate its most typical format, in which a whole program of cutting-edge research that has been carried over many years is distilled into an easy-to-understand review by the authors of the research themselves. I have found many of the articles appearing in the journal not only to pay big informational dividends for relatively small investments of reading time, but also to inspire me to dig deeper into literatures about which I originally knew nothing. My discussions with students and colleagues suggest that my experience is common. Appreciating this typical-use scenario helps guide authors who would write for us. Although Current Directions readers are bright and motivated, they should not be expected to know the jargon or background theories in a topic. Authors need to think more about how to communicate their ideas most effectively to a broader audience than they do when writing for a specialty journal. This means keeping attention focused on the big picture and concentrating on ideas, methods, results, messages, and theories that can be exported to others working in different areas.

As you know, Current Directions is an important resource in the classroom. How will that influence your decisions with regard to topics and articles that you want to publish?

Given the broadly accessible way in which Current Directions articles are written, they are often much more appropriate for both undergraduate and graduate classes than articles appearing in Nature, Science, and PNAS. Turning this unique role into an educational opportunity requires attention both to what students want to know and what teachers want to tell them. These are not always the same thing. Interviewing undergraduate students about the origins of their interest in psychology often reveals motivations like, “I’m curious about why my friend is always so angry” and “I notice that I act in very different ways at parties, family dinners, and school, and wonder why.” While these are great questions, they are unlikely to be directly convertible into Current Directions treatments without a larger theoretical framing. The most compelling articles for students will be those that connect with natural curiosities that people have about themselves but also organize and inform those curiosities into coherent and deep theories that require a systematic inquiry.

This focus on theoretical insight distinguishes Current Directions from many journalistic treatments of psychology. Current Directions articles are written by the scientists participating in research themselves. The huge advantage that this brings is that the articles are being prepared by scientists who intimately know the relevant theories, results, and literature. The scientists selected to write articles will have a proven track record of communicating to a broad audience and will have found metaphors, analogies, models, visualizations, and organizational structures that they have devised over the years to effectively convey difficult concepts. Most of us have had the frustrating experience of reading media reports that oversimplify a scientific result to the point of misrepresentation or simply get fundamental facts and ideas wrong. By having scientists who are working on the “front lines” write the articles themselves, such inaccuracies can be dramatically reduced. In this age of echo chambers and the spread of misinformation on social media, having informational sources that can be trusted is a public good worth treasuring and supporting.

This resource draws from research published in APS journals and other sources, along with interviews with several psychological scientists.