I’ve created my first R package, TOSTER (as in Two One-Sided Tests for Equivalence in R). Don’t worry, there is also an old-fashioned spreadsheet available as well (see “TOSTER Materials,” below).

One approach is to specify effect sizes we consider “not small.” For example, we might decide that effects larger than d = 0.3 (or smaller than d = –0.3 in a two-sided t test) are “not small.” Now, if we observe an effect that falls between the two equivalence bounds of d = –0.3 and d = 0.3, we can act (in the good old-fashioned Neyman–Pearson approach to statistical inferences) as if the effect is “zero or very small.” It might not be exactly zero, but it is small enough.

The idea is simple, and it is conceptually similar to the traditional null-hypothesis test you probably already use to reject an effect of zero. But whereas all statistics programs will allow you to perform a normal t test, it is not so simple to perform a TOST equivalence test.

Psychological science really needs a way to show effects are too small to matter (see Morey & Lakens, 2016). So I made a spreadsheet and R package to perform the TOST procedure. The free TOSTER package is available from the Comprehensive R Archive Network (CRAN), which means you can install it using install.packages(“TOSTER”).

Let’s try a practical example using the vignette that comes along with the R package.

With n = 21 in each condition, Eskine had 33% power to detect an effect of d = 0.48. This is the effect the authors of the replication study designed their experiment to detect. The original study had shown an effect of d = 0.81, and the authors performing the replication decided that an effect size of d = 0.48 would be the smallest effect size they would aim to detect with 80% power. So we can use this effect size as the equivalence bound. We can use R to perform an equivalence test:

You see, we are just using R like a fancy calculator, entering all the numbers in a single function. But I can understand if you are a bit intimidated by R. So, you can also fill in the same info in the spreadsheet. 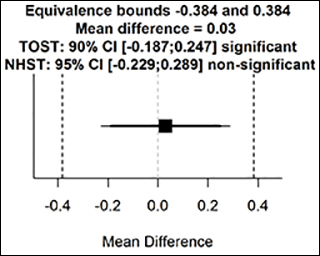 Moery and Calin-Jageman concluded from this study: “We again found that food exposure has little to no effect on moral judgments.” But what is “little to no”? The equivalence test tells us the authors successfully rejected effects of a size the original study had 33% power to reject. Instead of saying “little to no,” we can put a number on the effect size we have rejected by performing an equivalence test.

If you want to read more about equivalence tests, including how to perform them for one-sample t tests, dependent t tests, correlations, or meta-analyses, you can check out a practical primer on equivalence testing using the TOSTprocedure I’ve written. It’s available as a preprint on PsyArXiv. The R code is available on GitHub.

The TOSTER spreadsheet is available here.

The TOSTER R package can be installed from CRAN using install.packages(“TOSTER”).

The practical primer on equivalence testing using the TOST procedure is available here.

The R code is available here.

Lakens, D. (2015). Always use Welch’s t-test instead of student’s t-test. Retrieved from http://daniellakens.blogspot.nl/2015/01/always-use-welchs-t-test-instead-of.html

Lakens, D. (2016a). Introduction to equivalence testing with TOSTER. Retrieved from https://cran.rstudio.com/web/packages/TOSTER/vignettes/IntroductionToTOSTER.html

Morey, R. D., & Lakens, D. (2016). Why most of psychology is statistically unfalsifiable. Retrieved from https://raw.githubusercontent.com/richarddmorey/psychology_resolution/master/paper/response.pdf

Daniel Lakens is an experimental psychologist at the Human-Technology Interaction Group at Eindhoven University of Technology, the Netherlands. His main lines of empirical research focus on conceptual thought and meaning. In addition, he writes applied articles on statistics and teaches a free “Improving Your Statistical Inferences” MOOC on Coursera. He can be reached at D.Lakens@tue.nl.