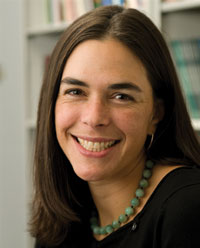 The National Academy of Sciences has announced that APS Fellow Sian L. Beilock is a recipient of the 2017 Troland Research Award. The $75,000 prize is awarded to young investigators in recognition of outstanding scientific achievement within experimental psychology.

Beilock, the Stella M. Rowley Professor of Psychology and an Executive Vice Provost at the University of Chicago, primarily conducts research on performance, anxiety, and why people “choke” under pressure. More specifically, her research examines how high-stress situations influence underlying psychological, physical, and neurological mechanisms to compromise performance, even in highly skilled individuals. As Beilock and her colleagues have demonstrated, anxiety itself can interfere with our ability to learn and execute complex skills, depriving people of the cognitive resources they need to excel.

From school math tests to professional sports, these findings have tremendous cross-cutting implications that affect people from every walk of life. In addition to demonstrating the very real effects of anxiety on performance, Beilock also is pursuing solutions to help people overcome the negative effects of performance anxiety.

For example, Beilock and colleagues have found that the more anxiety children have about math, the worse their performance. But these math-anxious children are not performing poorly simply because they are intrinsically bad at math. In a cutting-edge study, Beilock and colleagues have developed an interactive app to help parents and kids learn about math together as a positive activity. Their results showed that using the app just once a week led to significant positive outcomes on math learning.

In 2011, Beilock received the APS Janet Taylor Spence Award for Transformative Early Career Contributions. Her groundbreaking work on performance anxiety has resulted in the publication of more than 100 scientific papers and two critically acclaimed books, Choke: What the Secrets of the Brain Reveal About Getting It Right When You Have To and How the Body Knows Its Mind: The Surprising Power of the Physical Environment to Influence How You Think and Feel.