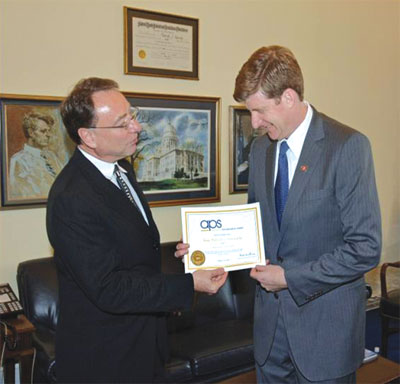 Not long ago NIH invited 250 of the best scientific minds from universities across the country to advise on how to start a $120–150 million research project. It’s the kind of meeting NIH often convenes to get expert advice on many scientific issues deemed ready for such a boost: molecular genetics, biochemistry, virology. But this was the first time the agency had asked for guidance on the basic science of psychology and behavioral research. The key question NIH had for the group was how to better study the most fundamental psychological processes: how we learn, think, and remember; how we work and communicate with others, as individuals and in groups and organizations; how we develop attitudes, emotions, and relationships; how we perceive and pay attention to the world around us; and how our brains, genes, and basic biology interact with our environments.

It would be easy to miss the historical significance of this meeting. Although it might have appeared as just one more scientific gathering, it was nothing less than the start of a new era in health research, one focused not only on vaccines, pills, and surgical techniques, but also on new effective behavioral ways to combat smoking, drinking, overeating, unprotected sex, too much stress, too little exercise, suicide, depression, and even decisions not to take medication or other choices that lead to poor health and too often to untimely death. The aim is better health by learning new and effective ways to prevent and treat heart disease, cancer, diabetes, mental disorders, substance abuse, violence, dementia, and the gamut of public health concerns under NIH’s purview that often tear apart our families, our communities, and our nation. It’s a clear sign that our nation’s premier health funding agency is getting serious about the effects of behavior in our lives.

Getting to this point, however, was a 10-year effort of convincing and collaborating with NIH on the best way forward. Many individuals and organizations contributed to the meeting and to the initiative that gave rise to it over the course of many years. Hundreds more will be involved in the research to come. But we are proud to say that it began with the two of us, and that is where we want to start this story.

In fact, it all began in the usual way — usual for Washington, anyway. Association for Psychological Science (APS) Executive Director Alan Kraut was testifying before a House Appropriations Committee hearing. On the Committee sat Rep. Patrick Kennedy, waiting to ask him questions. It was a typical Washington scene, the kind that happens hundreds of times each year — a scientific organization presenting ideas through an expert witness in a formal setting to a senior member of Congress who is listening precisely because he wants to hear how he might use his position to better our country.

Kennedy was on the receiving end, but all the while thinking about the health problems in his Rhode Island district, and his interest in mental Illness and substance abuse prevention, all of which led him to be such a strong advocate for NIH for his more than 15 years in Congress. It was the reason he had prepared questions for that day. Why was progress on the important public health issues he championed — depression, schizophrenia, addiction, heart disease, cancer, dementia, diabetes — so much slower than he (and NIH) hoped? He, too, had heard the spiel before. But this time was different. Something clicked. He asked this crucial question. “Doctor, why do you think NIH hasn’t taken advantage of these findings?” The answer led to more discussion back in the office. We were off!

It ended ten years later in not such a usual way — even for Washington — with a major new initiative at NIH called OppNet, shorthand for Basic Behavioral Science Opportunity Network, the focus of the recent meeting. We both believe its results are going to change the face of health care.

Ours is an instructive story about how an important program initiative came to be, a story for others in Congress, at Federal research agencies, and among nonprofit organizations to examine. Between its beginning and end lie the lessons learned.

Lesson One: Match the issue with the right champion(s). Long before that day of testimony, the Kennedy office was seen as among the most effective in Congress at tackling national health problems, particularly around reimbursement for mental health and substance abuse treatment, but really around all health issues. And as a senior member of the Appropriations subcommittee that funds NIH, the Congressman also focused on the research base for health disorders.

And well before that testimony came research-agenda-setting exercises by the Association for Psychological Science. An idea expressed by a staff member and discussed by a Board, more discussions within, followed by reports, meetings with experts, discussions with federal research agency officials, all around where a discipline’s future and our nation’s health priorities might meet. About why psychology and basic behavioral science are so important in national health policy.

Although we came to it from different directions, we converged in our shared concerns about health and behavior, and we were ready to agree that one of the critical missing links was a real and sustained focus on basic behavioral science at NIH.

Lesson Two: Do not underestimate systemic inertia. Tensions exist among policymakers even when a goal like quickening the pace of health discoveries is genuinely shared by all. Those tensions are healthy and appropriate and need to be addressed. Here the tensions were with NIH leaders, who believed they already were headed in the right direction and hesitant to accept an outside approach championed by a professional or disciplinary association. Kraut’s organization had been pressing NIH on this issue for some time but without much success. The Kennedy office, in conjunction with other Democrats and Republicans in Congress — in the House, Reps. Brian Baird, Tim Ryan, Jim Leach, James Walsh, Ralph Regula, and on the Senate Appropriations Committee, Senators Daniel Inouye, Tom Harkin, and Arlen Specter — looked for ways to convince NIH that this was a broader issue that spanned multiple disciplines, multiple health issues, and multiple Congressional offices. Along the way were formal letters back and forth between NIH and Congress, House and Senate floor statements, insertions in the Congressional record, Congressional requests for reports and information, and report language from the House and Senate Appropriations Committees to NIH that gave a sense of how the Committees felt about the importance of basic behavioral science at NIH.

Lesson Three: Relationships are important. While the formal institutional Congressional–Federal Agency–Scientific Association relationships can start the process, there still is an informal and personal element that is needed to get things accomplished. Testimony, letters, even Congressional floor statements represent the beginning of activities, not their end. APS continued a staff-to-staff dialogue with counterparts at NIH and in Congress, helping to translate Congressional intent to NIH and NIH intent to Congress. Key NIH officials met face-to-face with key Members of Congress and Congressional staff to candidly discuss the issue. Kennedy and Kraut jointly met with other Congressional offices to explain issues in person. Finally, enough Congressional support developed so that legislation promoting basic behavioral science was ready to be introduced. NIH informally asked for a chance first to scientifically study the topic. A tacit agreement not to proceed with the legislation was reached. Instead over the course of the next eighteen months, NIH brought together its own blue ribbon group of outside experts who told them that, yes, NIH needed to focus more on basic behavioral science.

Organizational resistance can be so strong (see Lesson Two) that even when the signs are all “go,” in this case from an NIH blue ribbon expert group, from Congress, and APS, there can still be enormous agency inertia to overcome. It took another six months for that blue ribbon opinion to be digested by NIH’s internal policy makers. The decision? NIH decided not to abide by the experts; they decided they were doing enough. What followed were more letters, more report language, more requested NIH reports, and most important, more informal discussions.

Lesson Four: Getting key players to agree takes time. The best result comes from a collaborative process, which takes a great deal more time but improves the final product. And we think it debunks the common myth that Congress wants simply to tell a research agency like NIH what to do. Throughout this entire process, there was a respect given by Congress to NIH that allowed for working together, even when NIH seemingly made a final decision not to go ahead. At no point did any Congressional office position itself to give any ultimatum or to force NIH to move faster than it wanted. Congress recognized the enormous health expertise of NIH and that a huge $30 billion-plus agency needs time to assess any large change in policy.

Lesson Five: Persistence and perseverance are the keys to success. It is 10 years from that first interaction between Kennedy and Kraut. And in all those years, neither of us abandoned this issue. Of course, we had other important agenda items to pursue. We even agreed at one point we weren’t sure that this basic behavioral initiative would ever take place, and that might be just the way certain things go. We both knew it is a fact of political life that not every good idea gets implemented. And neither of us worked on this issue all the time. But we also never let it drop completely. In time was new leadership and key staff changes at NIH as well as another speedier review of NIH activities, and in separate meetings with the NIH Director’s office, we both were told that an initiative meeting everyone’s needs would begin within a year.

In the short time since, in addition to that initial NIH meeting of experts, NIH Director Francis Collins has touted the basic behavioral science initiative, OppNet, in many public statements, even saying he hoped it could be extended after its initial run. Two senior NIH Institute Directors are heading the planning effort and have made many public appearances talking about its importance. Support for OppNet has appeared in every NIH budget document since. The tension among all parties is gone, and a goal we all agree on is being set.

Patrick Kennedy was a Member of Congress from 1995 until retiring in 2011. He now serves as Chair of One Mind for Research, a campaign to increase support for brain and mind research. Alan Kraut is the founding Executive Director of the Association for Psychological Science, the organization devoted to research psychology.

Behavioral researchers are begun investigating a phenomenon called pre-crastination, or rushing to get things done even if requires unnecessary effort. More