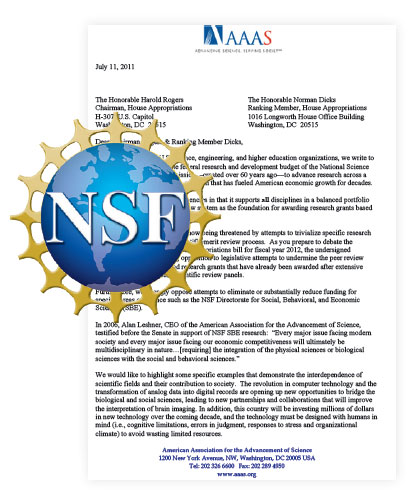 In an APS-inspired effort, the science and engineering community has joined forces to oppose cuts in funding for basic behavioral and social science research at the U.S. National Science Foundation (NSF).

Organized under the auspices of the American Association for the Advancement of Science (AAAS), nearly 150 organizations across the full spectrum of disciplines jointly sent a letter to the leaders of the Appropriations Committee of the US House of Representatives saying “we strongly oppose attempts to eliminate or substantially reduce funding for specific areas of science such as the NSF Directorate for Social, Behavioral, and Economic Sciences (SBE).” The groups characterized proposals to eliminate specific NSF behavioral and social science grants as “legislative attempts to undermine the peer review process by seeking to defund research grants that have already been awarded after extensive evaluation by independent scientific review panels.”

“Defunding specific grants or eliminating entire sets of disciplines, such as those represented by the SBE program, sets a dangerous precedent that, in the end, will inhibit scientific progress and our international competitiveness,” wrote the groups.

“Stimulated by a suggestion from Alan Kraut,” said Leshner, “we crafted a letter and strategy through which we were able to mobilize nearly 150 scientific societies and universities to stand behind the social and behavioral sciences and NSF. Importantly, we were able to recruit societies that represent a very wide range of physical and biological science groups, as well as the usual social and behavioral science groups you’d expect on such a letter.”

Many societies signed on as a result of an APS-coordinated effort among the Council of Engineering and Scientific Society Executives (CESSE, www.cesse.org), a 180-group coalition whose board includes APS’s Alan Kraut. In addition, part of the overall strategy was developed with Federation of Behavioral and Brain Sciences Executive Director Paula Skedsvold.

“When all of science stands together, it makes a big difference,” said Leshner.

The result was that no cuts were proposed by either the House of Representatives Appropriations Subcommittee for NSF or by the Full House Appropriations Committee. Action on the House Floor and in the Senate yet to to come, but there were earlier House hearings specifically on social and behavioral science at NSF and, separately, calls from US Senator Tom Coburn (R-Okla.) to eliminate SBE. The fact that there have been no concrete legislative proposals to cut NSF’s behavioral science is being taken as a sign of the effectiveness of the AAAS Intersociety Letter.

Other notable figures outside of the scientific community have voiced opposition to the attacks on behavioral science, including columnist David Brooks who wrote in The New York Times that “we are in the middle of a golden age of behavioral research” and that the Coburn proposal “is exactly how budgets should not be balanced — by cutting cheap things that produce enormous future benefits.”