During the 1976 presidential campaign, then-candidate Jimmy Carter famously told Playboy magazine: “I’ve looked on many women with lust. I’ve committed adultery in my heart many times.” Carter’s unguarded remarks were published in the November issue, just days before the election, and they caused a broad public uproar. The campaign was already concerned about the appeal of Carter’s Southern Baptist faith, and some believed this candor would tip the balance to the Republican incumbent Gerald Ford.

It didn’t. Carter went on to squeak out a victory, and became the country’s 39th president. But the Playboy interview put evangelical Christianity in the national spotlight. Carter had been paraphrasing Matthew in his talk about lust—specifically the teaching of Jesus, in the Sermon on the Mount, that mere thoughts can be sinful. How would such beliefs about sin shape Carter’s secular performance as the country’s leader?

Baptists are particularly ascetic in their beliefs, but Protestants in general see taboo thoughts and emotions—not just deeds—as sinful and threatening. Protestants tend to moralize thinking, so that the mere idea of adultery or violence is much like the act itself. This contrasts starkly with both Judaism and Catholicism, which focus more on deeds—behavior—rather than beliefs. In addition, because Protestants lack formal rituals for confession and atonement, they are more apt to focus on productive work as the best way to banish depraved thoughts and ally anxiety.

Psychological scientist Dov Cohen believes these basic theological differences are psychologically meaningful—and consequential in everyday lives.  He and his University of Illinois, Urbana-Champaign, graduate students, Emily Kim and Nathan Hudson, have been exploring the ways in which religious differences shape our mental processes and behavior. Specifically, they speculate that Protestants’ psychological defenses—how they cope with forbidden and threatening emotions—may lead to more novel and creative thinking.

To understand this dynamic, one must resurrect some basic Freudian ideas—with modern twists from cognitive psychology. Freud believed that we deal with forbidden thoughts by denying, inhibiting, redirecting or transforming them. One way to do that—one so-called defense mechanism—is sublimation, the channeling of forbidden or suppressed emotions into productive, creative work. From the perspective of modern, dual-processing theory, this means that troublesome thoughts are moved into a less conscious realm of the mind—where they are transformed by a looser, impressionistic kind of thinking. Information theory explains how threatening material might be gated out of consciousness and readmitted in less threatening form.

So at least that’s Cohen’s updated Freudian theory, which if true should predict cultural differences in sublimation and, in turn, in creativity. That is, Protestants would be expected—compared to Jews and Catholics—to  sublimate more of their intolerable, worrying thoughts—because they have no way to get rid of them. Thus, Protestants should cope with threatening emotions by being more creative in life and work.

Cohen and his students have tested this idea, both in experiments and with survey research, all differentiating Protestants, Catholics and Jews. For example, they recruited only young men with sisters, and manipulated them with a photo-diary task into having forbidden thoughts of incest. They wrote in the first person about a series of scenes involving boys and girls. The scenes were innocent enough to begin, but gradually changed, so that by the end, some of the men were writing about their sister while viewing a swimsuit model in a bikini. These manipulations were designed to create conflict for some of the men, so they would likely suppress or sublimate the erotic thoughts.  Afterward, the scientists asked them about their career goals and workplace values—to see how much they valued creativity. In another version, the men were asked to actually write a short poem or to make a clay sculpture.

The results were the same in both versions. Conflicted Protestants who were tricked into thinking erotically about their sister—these men were especially drawn to creative careers—as if they had something they needed to work out with creative expression. The taboo desires also led to more artistic work—as judged by independent judges—but only for Protestants. Catholics and Jews showed none of these effects.

And again, Protestants who recalled an anger-provoking incident and then put it out of mind—these volunteers did the most creative work. Anger itself did not have this effect on creativity. Only the suppressed anger led to creativity, and only among Protestants. Notably, some of the most creative work in both these studies expressed the forbidden emotions—both the eroticism and the hostility. 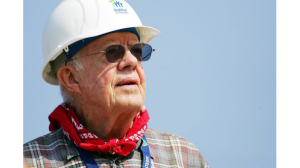 The scientists confirmed the experimental findings survey evidence. In two very different surveys, Protestants who expressed more anxiety about depravity and taboo emotions—these respondents ended up choosing the most creative careers and having the most creative achievements. Again, this was not true of Catholics or Jews. Cohen and the others summarize all this evidence in an article to appear in the journal Current Directions in Psychological Science.

Freud is said to have remarked, upon seeing the skyscrapers of Manhattan, that a lot of sublimation must have gone into their creation. Who knows what he would have thought of the sustained burst of creative energy—ranging from diplomacy to philanthropy and more—that has made Jimmy Carter the undisputed best former president the country has seen.

Entrepreneurs have brought us smartphones, GPS, and online shopping. What drives these innovators? Why do some succeed while most fail? Psychological scientists face a ripe opportunity to help answer these questions, says APS Fellow Robert Baron.

A sample of research exploring