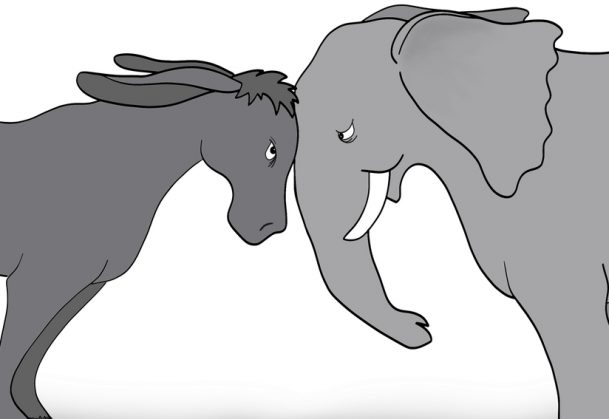 People who occupy the extreme ends of the political spectrum, whether liberal or conservative, may be less influenced by outside information on a simple estimation task than political moderates, according to research published in Psychological Science.

The research, conducted by psychological scientists Mark J. Brandt and Anthony Evans of Tilburg University and Jarret T. Crawford of The College of New Jersey, suggests that because political extremists hold their own beliefs to be superior to the beliefs of others, they may be more resistant to the so-called anchor bias, even for non-political information.

“Political differences really drive a wedge between people, and previous research has shown that people on the political extremes are more likely to perceive large partisan differences and political polarization and to be intolerant of people with different political beliefs,” says Brandt, who led the research.

To find out, Brandt and colleagues employed a commonly used anchoring task, in which participants are asked to make an estimate after being given an anchor number. For example, participants may be asked: “The distance between New York and San Francisco is greater than 2,000 miles. How far is it?”

The task is politically neutral, and so it provides a tool for teasing apart the two competing characterizations of extremists. If political extremists take a relatively unthinking approach, then they’re likely to rely on heuristics in making decisions and their estimates will be close to the anchor number. If, however, extremists are especially thoughtful and confident decision makers, they should produce estimates that are farther away from the anchor.

For the first experiment, the researchers analyzed data originally collected as part of the Many Labs project, examining data from 4,846 participants drawn from 25 samples of participants in the United States. All of the participants answered four anchor-related questions — some were randomly assigned to receive low anchors (e.g., distance is longer than 1,500 miles) and others were assigned to receive high anchors (e.g., distance is shorter than 6,000 miles) for a given question.

In general, the anchors provided by the experimenters influenced participants’ estimates, in line with many previous studies.

But the data also showed that participants’ ideology and attitudes played an important role: People who were ideologically more extreme and who reported more extreme attitudes on specific political issues produced estimates that were farther away from the anchors, suggesting greater resistance to the anchor bias.

A second experiment confirmed these findings and revealed a potential mediating factor: belief superiority. People who were more extreme in ideology and political attitudes also reported stronger support for the idea that their beliefs were superior to those of others. And people who reported greater belief superiority, in turn, produced estimates that were farther from the anchor.

Importantly, the results couldn’t be explained by participants’ level of education or their so-called need for “cognitive closure.” Furthermore, the results were similar when the direction of the anchor was specified and when it was unspecified (e.g., Is the population of Chicago more less or than 200,000?).

“These findings suggest that political extremists may make more confident judgments and are not necessarily unthinkingly relying on heuristics,” says psychological scientist and lead researcher Mark J. Brandt of Tilburg University in the Netherlands.

While previous work has often found personality and cognitive differences between liberals and conservatives, this new research shows a consistent effect of political extremity.

“We aren’t sure why there are differences between liberals and conservatives in some situations, but not in others — this will be a useful puzzle to solve in the future,” says Brandt.

All data and materials have been made publicly available via the Open Science Framework and can be accessed at https://osf.io/pqf9r/. The complete Open Practices Disclosure for this article can be found at http://pss.sagepub.com/content/by/supplemental-data.