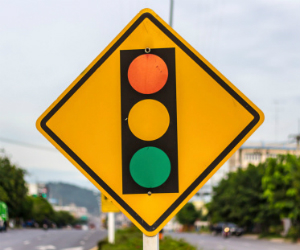 A major survey by the car insurance industry found that nearly 85% of drivers could not identify the correct action to take when approaching a yellow traffic light at an intersection (and, no, the correct response is not to speed up).

When a traffic light changes from green to yellow we have to make quick decisions without much information, making them one of the more dangerous encounters on the road. In 2009, the Federal Highway Administration estimated there were 1.2 million crashes at intersections with traffic signals, resulting in 372,000 fatalities or injuries.

However, a recent study found that giving drivers advanced warning about light changes could have the potential to make intersections dramatically safer. A team of researchers led by psychological scientist Leo Gugerty of Clemson University found that when drivers were given advance warning that a green light was about to change, they were more likely to slow down and stop at intersections.

Gugerty and colleagues expected that even just 1.5 seconds of advance notice before a light change would give drivers enough extra decision making time to increase their rates of slowing down and stopping at a yellow light.

In one experiment, 80 participants completed a 45-minute course in a driving simulator which included 36 high-speed intersections. Participants were divided into either a “no warning” control group or one of three “warning” groups that received an advance warning message before green lights turned yellow.

The advanced warning groups received one of three different types of warning: a flashing sign hanging over the road, a series of lighted warning poles along the shoulder, or an onboard LCD screen that beeped and flashed a warning message.

Not only were warned drivers more likely to stop, but in all of the warning conditions drivers also slowed down more gradually, which could help prevent rear-end collisions.

“When faced with yellow traffic signal onsets in the DZ, drivers who had received advanced warnings rarely exhibited unsafe behavior, such as speeding up,” Gugerty and colleagues write in the journal Human Factors. “Instead, warned drivers exhibited greater anticipatory slowing well before the intersection and the warning, when compared with unwarned drivers. This greater slowing caused warned drivers to stop more frequently and more safely than unwarned drivers.”

Surprisingly, the study also found that light-change warnings didn’t just affect driver behavior at intersections, but seemed to lead to slower, safer driving in general. This suggests that the warnings elicited a more cautious mindset among participants that lasted beyond single intersections.

The researchers cautioned, however, that simulator studies do not necessarily recreate the same experience as on-road driving, and participants may have been driving more safely than normal as a result of having their driving observed and evaluated.

Thoughts about having the green light start blinking 15 seconds or so before it changes to yellow? No additional signs needed, just an adaptation to the green?