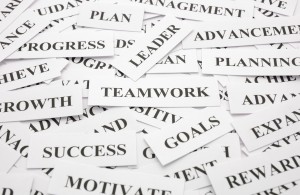 Sometimes, the best way to foster staff cohesion is the simple step of choosing the right words.

Psychological scientists Hazel Rose Markus and Alana Conner point this out in their new books, Clash!: 8 Cultural Conflicts That Make Us Who We Are (2013, Hudson Street Press). In a chapter on workplace cultures, they cite research showing how organizations can nurture interdependence by simply watching their language.

Stanford psychologist Lee Ross and his colleagues, for example, randomly assigned Israeli pilots and American college students to play a game that named either the Wall Street Game or the Community Game. In fact, they were all playing a version of an economics game called the Prisoner’s Dilemma, in which participants take turns either allotting rewards or extracting penalties according to rules that pit cooperation against self-interest. The researchers discovered that participants who were told they were playing the Community Game were more cooperative than those playing the so-called Wall Street Game.

In another set of studies conducted several years ago, Ross and psychologist Aaron Kay, now at Duke University, found that planting subtle suggestions of cooperation in people’s minds—such as having them unscramble sentences that includes words such as fair and alliance—led them to prefer cooperation over self-interest. In contrast, participants who unscrambled words related to competition, such as tournament or cutthroat, took the self-interested route in the game.

“Although laboratory experiments are a long way from your average Fortune 500 workday,” Markus and Conner argue in their book, “these findings suggest that a few quick linquistic fixes could spawn a more collaborative, and therefore more creative, workplace.”

Student Notebook: Communicating Psychological Science—Why It Matters and How to Get Started

Psychological science, if communicated effectively, has a key role to play in addressing some of the most urgent problems of our time. More