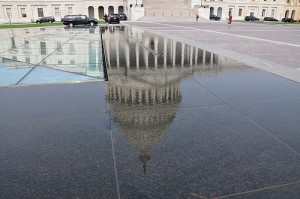 A new Gallup poll shows that Americans’ confidence in the Congress is at an all-time low. A measly 10 percent of citizens express confidence in lawmakers, and most say they have little or no confidence.  That is the worst rating of any American institution—including the military, HMOs and labor unions—since this polling began in 1973.

A lot of this disaffection has to do with the extreme partisanship that has seemingly paralyzed Capitol Hill. Today’s is not the first political stalemate in American history, but it is certainly one of the most maddening. Lawmakers—and the country itself—appear locked into extreme ideological positions that allow little if any room for compromise.

Few dispute this. But there is a lot of disagreement over who’s to blame for this mess. Some analysts point the finger at the rigid dogmatism of Republicans and conservatives, while others blame ideological extremism on both the political flanks. Still others say that it depends on the issue, that conservatives are more rigid on some issues but liberals are more unbending on others.

Psychological scientist Kaitlin Toner and her colleagues at Duke University decided to sort this out. They measured Americans’ attitudes on nine contentious political issues of the day, ranging from tax policy to immigration and abortion. But they also wanted to see how dogmatic Americans of different political stripes are—how inflexible and resistant to change. In addition, they measured the degree to which Americans see their beliefs as superior—better or more correct—compared to the beliefs of others. Most people believe their views are correct, but some may tolerate other views while others judge all but their own as inferior. It’s this nuance that the Duke scientists wanted to explore. In other words, do both extreme conservatives and extreme liberals act more superior than moderates, or are conservative views alone linked to dogmatism and belief superiority?

They surveyed more than 500 American adults of all ages, about half of whom had some college education. They measured belief superiority on nine issues on which liberals and conservatives tend to disagree: health care, illegal immigration, abortion, government safety net, voter identification, income tax rates, torture, affirmative action, and the degree to which laws should be based on religious beliefs. Belief superiority ranged from “My belief is no more correct than other beliefs” to “Mine is the only correct view.” Volunteers also completed a measure of dogmatic disposition, which required ranking such statements as: “Anyone who is honestly or truly seeking the truth will end up believing what I believe.”

The results, described in a forthcoming issue of the journal Psychological Science, were clear and intriguing. Those endorsing conservative views were much more dogmatic, suggesting that there is some validity in blaming Republicans for today’s stalemate. However, the picture changed somewhat when it came to belief superiority. Here, people at the extremes of the political spectrum—left and right—felt more superior about their views, compared to moderates.

When the scientists drilled deeper into specific issues, the results were more nuanced.  Liberals felt more superior in their view about the importance of helping the needy and their opposition to religion-based laws, while conservatives expressed more superiority regarding their views on the importance of voter identification and opposition to affirmative action. What’s more, those who felt the most superior—“Mine is the only correct view”—were just as likely to be conservative or liberal when it came to specific issues. These rigidly superior people were liberal  on government aid to the needy, opposition to torture, and opposition to religion-based laws; they were conservative when it came to the need for voter identification, lower taxes, and opposition to affirmative action.

Toner and her colleagues conclude with this clarification: The findings do not suggest that liberals and conservatives are equally unreasonable in their feelings of superiority over political issues. Since some issues can be resolved with objective evidence—global climate change, for example—feeling superior can be a reasonable and justified position. This study did not attempt to address the objectivity of the various beliefs it examined.

Selections from Wray Herbert’s blogs—“We’re Only Human” and “Full Frontal Psychology”—appear regularly in The Huffington Post and elsewhere.

This extreme partisanship could come from a subconscious feeling of a dire economic and social crisis that gives a feeling of emergency and stress people.
But as the real reasons of that crisis are not clear, because too complexe for most of the minds, then ideology overcomes objectivity.
Mass media brainstorming is not really helping too, to clarify the problems.