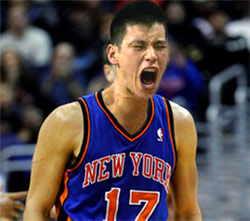 Professional basketball begins again next week, and dedicated fans will be happy to put last year’s labor disputes and lockout behind them. But many will also remember 2011-2012 as a magical season. It was the season of Jeremy Lin, a New York Knicks point guard who, for a few weeks last winter, captured the country’s imagination.

Lin was an unheralded and undrafted bench player from Harvard, one of the few Asian Americans in the NBA, whose unlikely hot streak landed him on the cover of Sports Illustrated—twice, back to back. He made headlines beyond the sporting press as well, from Time to the Associated Press, and was the subject of seven instant books. He inspired a huge merchandising rush and a new lexicon, including an official new English word: Linsanity.

As entertaining and uplifting as Linsanity was, however, Lin’s performance had nothing to do with a “hot streak.” Psychological scientists have known for years that hot streaks and other kinds of sporting “momentum” are an illusion—though a very compelling one. Close statistical analysis has convincingly documented that making one shot—or five or ten—does not boost the odds of making the next one.

Yigal Attali, a psychological scientist at the Educational Testing Service, decided to explore these questions with actual basketball statistics. He analyzed an entire NBA regular season, play by play, including shot attempts and their distance, assists, free throws, rebounds, fouls, substitutions, timeouts, turnovers, blocks and steals. Attali was most interested in analyzing pairs of shots: That is, if a player attempted a shot, what happened on the team’s next possession? Did that player shoot again? Or pass. Did teammates get the ball to him or not? Did he score? And so forth. Attali analyzed more than 170,000 such pairs of shots, by 448 different players.

Attali was not interested in individual players, but rather in team patterns. He found evidence that an irrational belief in the hot hand does indeed affect who shoots, and it also determines the risk and success of attempted shots. More specifically, as described in a forthcoming issue of the journal Psychological Science, players are more likely to take the next shot after having made a basket—especially if they sink a long one. They are also more apt to take longer, and more difficult, second shots. Coaches are not immune to this false belief either: They are less likely to sub out a player who has just made a shot, probably because they have (unwarranted) confidence in a player who is “in the zone.”

Paradoxically, believing in the hot hand may actually hurt team performance—rather than enhance it. Players in Attali’s analysis were actually less likely to sink a shot following a score than they were following a miss. There could be many reasons for this—harder shots, tighter defense—but whatever the reason, the phenomenon is really the opposite of the “hot hand.” It’s worth recalling that Linsanity was as much about assists—and Knicks victories—as it was about Jeremy Lin’s sharp shooting.

Excerpts from Wray Herbert’s two blogs—“Full Frontal Psychology” and “Were Only Human”—appear regularly in The Huffington Post and in Scientific American Mind.

I love how this relates to the subject of Self-Fulfilling Prophecies (SFPs) and thank you so much for sharing this!

“Close statistical analysis has convincingly documented that making one shot—or five or ten—does not boost the odds of making the next one.”

The question isn’t if the odds increase. It doesn’t matter if a player knows that the odds remain the same EVEN after he successfully shot 100 times.

What matters is if he believes that he can make the shot or not.

The amount of certainty on a belief, specially in the context of SFPs, have been proved that influences not only one’s Actions but also the Results of those Actions! This is even more relevant for a specific kind of SFP called: The Pygmalion Effect.

What are your thoughts about this?

Thank you for your time!