News > We're Only Human > Insecurity at the Borderline

Republican Senator Thad Cochran, who has represented Mississippi since 1978, this week used a clever psychological strategy to fend off a primary challenge from the right wing of the party. “The Tea Party,” he confessed on a final campaign swing, “is something I don’t really know a lot about.”

Nobody believes that. Cochran hasn’t been living in a cave. What he was doing, very effectively, was marginalizing his Tea Party rival, playing on the insecurities of a GOP “fringe” faction within the party’s establishment. And his opponent took the bait, reacting with hostility toward the powerful incumbent and behaving ungraciously in defeat.

Tea Party candidates have arguably been more hostile toward establishment Republicans than toward Democrats, and this is not an uncommon phenomenon. According to University of Pennsylvania psychological scientist Paul Rozin, we all define ourselves with various social “borders,” and our feelings of security and belonging inside those borders shape our attitudes and behavior. Paradoxically, Tea Partiers save their worst antagonism for the Republicans whose party they want to be invited to.

Rozin and his colleagues–Sydney Scott, Hana Zickgraf, Flora Ahn of Penn and Hong Jiang of Harvard–have been exploring the concept of social borders in a related but somewhat different way. They wondered if the language we use to label ourselves also reflects how secure, or insecure, we feel about our status. They ran some experiments to see if marginal members of established groups are more apt to use words that emphasize their membership, compared to confident, quintessential members of the group.

Consider the word university. Technically, any school of higher education that offers at least one graduate degree is a university, as opposed to a college. Since it’s more prestigious to be a university, Rozin wondered if institutions at the borderline of the category—ones with no Ph.D. programs, for example—would be more defensive of their status than well-established universities.

To test this, they compiled a sample of top national universities and top master’s universities. They had independent judges read and code their webpages, noting each time the text referred its actual name (Harvard, for example) and each time it referred to itself as a university (Harvard University or “the University”). They analyzed all such self-references, to see how often each school used the university label.

The results were clear, and supported the scientists’ prediction. Universities at the border of the university category emphasized their status much more often than archetypal universities. On average, master’s universities used the work university in six out of every ten references, compared to less than half of references by established universities.

OK, hold up. No one disputes that master’s universities do a wonderful job at their chosen mission. That’s not the point here. The point, suggested by the data, is that the people who are writing the ad copy for these borderland universities are unconsciously choosing language that enhances their status, suggesting a certain insecurity about their inclusion in the category. Harvard knows it’s a university, and knows you know.

Rozin and colleagues wanted to see how wide-ranging this phenomenon is, so they next looked at an altogether different kind of institution: airports. They presumed that airports that offer international flights are in a higher-status category than airports that offer only domestic flights, and they therefore expected that smaller international airports would consider it more important to label themselves international. Using data from the Federal Aviation Administration, they compiled a list of all U.S. airports with international in their formal title, and sorted them by size. Again, they had independent judges read and code the airports’ webpages, this time looking at the percentage of self-references that used the word international.

The findings echoed the first study. The small international airports were more likely than the large ones to emphasize their status as international. They used the word in more than 70 percent of all self-references.

In a final test of their idea, the scientists decided to look at a very small, very elite social group: the Ivy League. Few would dispute that these schools represent quality and high status in higher education: Brown, Columbia, Cornell, Dartmouth, Princeton, Yale and Harvard. 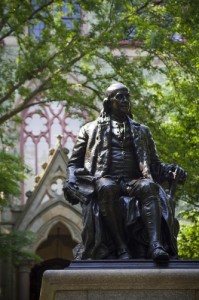 Oh, and Penn. Everyone forgets that the University of Pennsylvania is a member of this elite group. Rozin and his Penn colleagues decided to take advantage of this common exclusion to explore the borderland concept in a different way. They presumed that Penn students would be more insecure about their Ivy League status, and thus more likely to throw the phrase “Ivy league” in when they could. They compared Penn students with students at Harvard, the quintessential Ivy League school.

They recruited a sample of students at each school and asked them to list “things you think of” when you either think about or describe your school to other people. Penn students were much more likely than Harvard students to mention “Ivy League” or “Ivy”—both in public statements and in private thoughts about their school.

Rozin and his colleagues mention one more example of this phenomenon, one they didn’t test but find intriguing: the high-prestige category called science. For almost 100 years, psychology as a discipline has been jockeying to be classified as a natural science, rather than one of the less prestigious social sciences. In recent decades, they note, psychology has started adding the word “science” to itself and its specialties—cognitive science, neuroscience, psychological science. They conclude: “We think psychologists are defending their challengeable belief that psychology is properly categorized as a natural science, which physicists, biologists, and chemists—more firmly placed in the natural sciences—rarely feel compelled to do.”

The psychological scientists’ report will be published in a forthcoming issue of the journal Psychological Science.

News > We're Only Human > Insecurity at the Borderline

I think my comment probably reinforces the fact that Penn students are insecure regarding the status and prestige of their school, but I do not think Penn students are more insecure than Columbia, Dartmouth, Brown and Cornell ones, i.e students at every Ivy School apart from the big three. In fact, many would agree that this type of insecurity is much more heavily pronounced in Brown, Cornell and Dartmouth than Penn. I don’ t believe that when one thinks of Ivy League every other school comes to mind except Penn. What usually happens is just that people tend to associate the Big Three with Ivy league way more than any of the other ones.