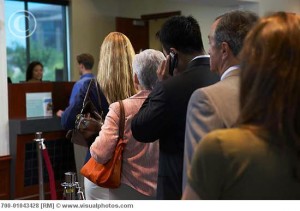 Americans are living precarious lives. Nearly half of all families—many with homes and cars and jobs—are one misfortune away from financial disaster. A medical emergency or even a temporary loss of employment could gobble up their meager savings in six months or less. One in four Americans has zero savings.

Many of these people are approaching retirement age, but they will never be able to retire the way they once imagined. There are many reasons for this dire financial situation, but one important one is that Americans simply don’t put enough money aside. Even when they have a little extra in their paycheck, they spend it, rather than socking it away for the future. Why do they lack the foresight to secure their financial futures?

Two psychological scientists are offering a new idea about this—and a possible prescription for changing Americans’ financial behavior. Leona Tam of the University of Wollongong, Australia, and Utpal Dholakia of Rice University believe that people in general—but Americans in particular—think about time in a way that discourages saving for the future. Specifically, Americans tend to think of time as a line, from past to present to future, and the scientists believe this linear, future-oriented thinking leads to unwarranted optimism—and less prudence today. They want to encourage Americans instead to think of time as cyclical, and imprudence as a recurring pattern of behavior that is problematic—and require concrete and detailed solutions.

Okay, so if you’re like me, you are thinking: Of course time is linear. Yesterday is past, I’m in the present today, and the future is coming tomorrow. How could it be otherwise? But apparently not all cultures think of time this way, and Tam and Dholakia believe that Americans can be taught to think of time—and saving money—in a cyclical way. Here’s how they tested this idea in the lab.

So the framing technique worked in general, but the scientists wanted to try it again, with a specific focus on saving for the future. So again the subjects read two different passages. One emphasized the present moment only—how much do you want to save now?—with no thought of the future: Whatever you save this month, that is what you will save next month, and the next, and on and on. The linear framing, by contrast, got subjects thinking about their future savings goal—how much, total, they need to accumulate for retirement some day in the future.

This time, those thinking of saving as a cyclical thing reported actual savings that were 82 percent higher than those thinking in a linear way. Notably, the linear thinkers were indistinguishable from control subjects, suggesting that linear financial thinking may be the automatic default position for Americans.

The scientists wanted to look at this one more way—to see just how time orientation might be causing the difference in personal savings. So in a final experiment, subjects were again assigned to either a cyclical or linear savings method, and again they made estimates of future savings. But this time the scientists also measured what they call “implementation planning”—that is, a concrete, detailed way to reach a savings goal, plus confidence and determination to do it. They also measured their optimism about the future, include future savings. The scientists expected that concrete planning would lead to more future savings, and that unwarranted optimism would lead to less.

And that’s what they found.  As reported in an article to appear in the journal Psychological Science, cyclical thinking created a mind-set that motivated more prudent saving, and it did this through concrete planning and fewer delusions about a rosy future.  Linear thinking, by contrast, caused people to be over-optimistic about the future, and thus put off actual saving for another day.

So how might these findings be useful? Tam and Dholakia envision personal financial counselors and retirement plan administrators talking to new employees who are considering contributing to a retirement plan. One key decision that new employees must make is what percentage of their income to put aside, and counselors could learn to use cyclical rather than liner language in discussing such savings, which should boost the amount set aside. Similarly, parents and teachers could use such an approach to inculcate saving habits in children. Experience shows that, once such financial decisions are made, they tend to endure.