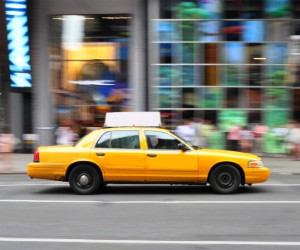 In May, Nobel Prize-winning economist John F. Nash Jr. and his wife Alicia were tragically killed in a car accident on the New Jersey expressway. Investigators reported that they were not wearing seat belts at the time, and died after being thrown from the backseat of their taxi.

Whether you’re in the front or back of a car, wearing a seat belt is often the most effective way to prevent serious injury in case of an accident. Yet, in some situations — such as riding in the back of a cab — people are far less likely to buckle up.

In New York City, taxi drivers and their passengers are exempt from laws regarding car seats and seat belts. According to a passenger survey from the NYC Taxi and Limousine Commission “only 38% of passengers reported they were using the taxi’s seat belts.”

Wearing a seat belt can save your life, whether you’re in the front or the back of a car; so how do people decide it’s “safe” enough to forego a seat belt?

A 2008 study from psychological scientists Özlem Şimşekoğlua of Izmir University of Economics and Timo Lajunen of Middle East Technical University in Turkey closely analyzed some of the many factors that people use when deciding when and where they’re willing to buckle up. Şimşekoğlua and Lajunen surveyed 277 Turkish students on when, why, and how often they wore a seat belt.

In line with previous research, they found that people’s beliefs about the effectiveness of seat belts had no relationship with how often they reported actually wearing one.

In a rational sense, people understand that seat belts could save their lives, but that knowledge in and of itself isn’t enough to entice them to buckle up. In reality, individuals decide whether to wear a seat belt in a given situation by weighing the potential risks and burdens of wearing a seat belt (it’s uncomfortable, uncool, it’s a hassle for just a short trip) against the perceived likelihood of getting into an accident.

“Since seat belt use is always an effective way for reducing one’s injury risk, this decision making process should be replaced by a habit of using a seat belt in every condition,” Şimşekoğlua and Lajunen conclude in the journal Transportation Research Part F: Traffic Psychology and Behaviour. “Hence, seat belt campaigns and interventions should aim at enforcing habitual seat belt use.”

When it comes to cabs, people may be less willing to buckle up because they’re just not in the habit or because a short trip on busy urban street doesn’t seem too risky.

Most research on seat belt usage relies on self-report and survey data, but a unique study sponsored by NHTSA tracked real-world data from 100 cars for one year.

The research team, led by NHTSA psychological scientist Ian J. Reagan, was able to analyze seat belt usage for every trip each driver made over this 12-month period. This allowed the researchers to precisely examine the factors associated with the decision to forego a seat belt.

After analyzing over 100,000 car trips, the research team concluded that the decision to wear a seat belt was likely associated with perceptions of convenience and risk; occasional users wore a seat belt for more than 80% of high-speed trips on interstates, but wore them for only about half of the trips on slower roads.

They also found that occasional seat belt wearers may be seriously misjudging how risky their driving really is: Drivers in the ‘infrequent’ group had an at-fault crash/near crash rate nearly double the rate of the other two groups.

“The analysis was not statistically significant, but the finding has important safety implications; converting these at-risk drivers to consistent belt users would reduce injury severity,” the researchers write.