Where Learning STEMs From

The need for STEM (science, technology, engineering, and mathematics) professionals has become critical in the United States. A recent Washington Post article stated there is a shortage of qualified U.S. workers needed to fill openings for high-paying STEM jobs. And this trend, says the Post, “is primarily caused by the More

Heritability in the Era of Molecular Genetics

Today it seems to be common knowledge that most behavioral and psychological traits have a heritable genetic component. But what does it really mean when a study says that the heritability of Trait X is 46%? Do you know? Do researchers know? According to a review written by psychological scientists More

The 5th FPR-UCLA Interdisciplinary Conference will be held October 19-20, 2012 at UCLA. The theme will be Culture, Mind, and Brain: Emerging Concepts, Methods, Applications. For more information visit: http://www.thefpr.org/conference2012/index.php More

Most doctors don’t recommend Tylenol for a broken heart or a supportive friend for a headache. But an article published by Janet Taylor Spence Award recipient Naomi I. Eisenberger in the February 2012 edition of Current Directions in Psychological Science shows there is a growing body of evidence that social More

More Than Just a Grade

After reading Mahzarin Banaji’s (2011) article in the Observer calling APS members to action, I was sold on using the APS Wikipedia Initiative (APSWI) as a classroom tool. It was just a matter of waiting until the right course came along. When I was scheduled to teach a graduate class More 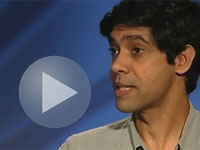 A Conversation About Music, Mind, and Health

What effect does music have on the brain, and what can music teach us about the brain? In this video 24th APS Annual Convention Speaker Aniruddh Patel and music therapist Barbara Reuer speak with David Granet of the University of California’s Health Matters about music, cognition, and health. Scientists are More