The National Institutes of Health (NIH) is offering three new funding opportunities which will be distributed through a newly established Diversity Program Consortium and are designed to address the lack of diversity in the scientific research community. The initiatives will include and be targeted toward serving the behavioral, biomedical, clinical More 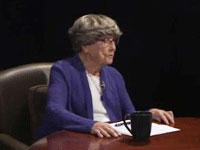 Inside the Psychologist’s Studio: Eleanor Maccoby

Some of the first women to enter the field of psychological research sought to examine differences between the sexes, even as they suffered from gender discrimination themselves, APS William James Fellow Eleanor Maccoby recently said in an interview with APS Past President Kay Deaux. Maccoby, known widely for her contributions More

How Warm Is Your Brand?

The world is having a love affair with Costco. Fortune Magazine ranks the warehouse retailer as one of the world’s most admired companies, and only partly because of its commitment to social responsibility. Operating under the philosophy that happy employees deliver effective customer service, the company pays its employees extremely More

NPR: Acting Surgeon General Boris Lushniak is the latest in a long line of surgeons general who have tried to pound the final nails into the coffin of America’s smoking habit.   “Enough is enough,” Lushniak says. But there’s no reason to think his new report on smoking and health More

In Life and Business, Learning to Be Ethical

The New York Times: LOTS of New Year’s resolutions are being made — and no doubt ignored — at this time of year. But there’s one that’s probably not even on many lists and should be: Act more ethically. Most people, if pressed, would acknowledge that they could use an More

Perspectives on Behavioral Priming and Replication

The January 2014 issue of Perspectives in Psychological Science features a special section focused on behavioral priming research and attempts at replication. The five articles included in the special section explore issues including the potential role of moderators in hampering the replication of priming effects and whether direct replications are More