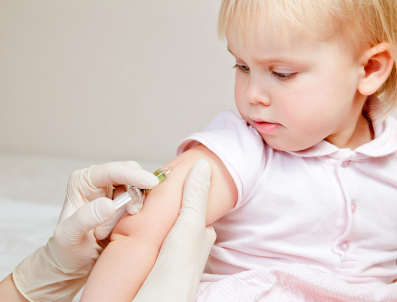 This little girl is doing the right thing, looking at the painful event reduces pain.

Dreading getting your flu shot? Surprisingly, if you want the shot to hurt less, don’t look away—look at the shot! A study published in Psychological Science

found that people experienced less pain from hot contact on their skin when they were looking at their hand, and even less so when they were viewing an enlarged version of it.

Volunteers were instructed to press a foot pedal when they began to feel pain from a heat probe on their left hand that gradually increased in temperature while they viewed, through mirror manipulations, either their own hand or a wooden object appearing where the hand would be. During the second session, the hand or the wooden object they viewed were either enlarged or reduced. Results found that volunteers who looked at their own hand had a higher pain threshold than those who looked at the object.  Interestingly, they tolerated even more pain when viewing their hand as bigger than its true size and tolerated less pain when the hand was seen as smaller.

These findings suggest that  the experience of pain is closely linked to the part of the brain that represents body size. This may have important implications for new cognitive therapies working on relieving pain.

For more, check out this press coverage from The Telegraph.

The latest Psychological Science in the Public Interest examines psychological interventions for the treatment of chronic pain.

Driscoll and colleagues address the gap between the evidence of the effectiveness of several psychological interventions and their availability and use in treatment of chronic pain.

A team of clinical scientists is examining a possible psychological symptom that may heighten craving and risk of replace for people recovering from opioid dependence.dependence.