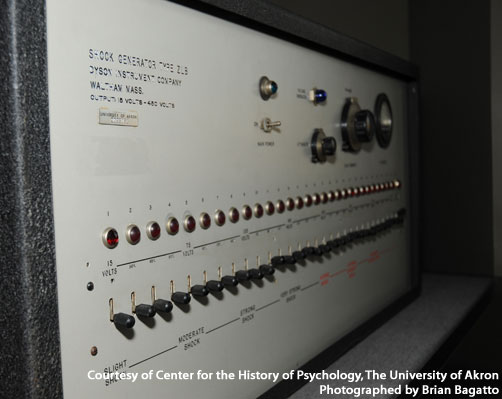 Stanley Milgram's Simulated Shock Generator located at the Center for the History of Psychology at The University of Akron.

It is commonly thought that participants in Milgram’s shock experiments obeyed the researcher because of people’s natural tendency to conform to those in authority. In this article, Reicher, Haslam, and Smith review findings from the original Milgram study that suggest a different conclusion: Participants obeyed because they identified with the experimenter. The authors describe their own study of the Milgram experiments and detail evidence supporting their suggestion.

Working Toward the Experimenter: Reconceptualizing Obedience Within the Milgram Paradigm as Identification-Based Followership

[extracts from the article’s conclusion]

“The evidence summarized [in the journal article] provides support for the suggestion that participants’ behavior within the Milgram paradigm reflects the extent to which they identify with the parties that confront them on the empirical stage that is set before them: on the one hand, an experimenter who asks them to help advance scientific understanding, and on the other, a learner who appeals to their sense of civic morality.

“These findings build upon a number of recent studies that have reinvigorated discussion surrounding Milgram’s classic obedience experiments. In the first instance, the findings build on observations by Packer (2008) that participants’ decisions to stop administering shocks are made at points at which it becomes clear that they have a choice to make because they are exposed to opposing voices (those of the experimenter and the learner) that urge them to take different courses of action. In addition, they also develop insights that emerge from Burger’s (2009a) partial replications of Milgram’s research, which suggest that participants disobey when they are presented with a direct order to continue administering shocks.

“Together, these various observations suggest to us that there is a case for reconceptualizing the behavior of participants within Milgram’s studies. Despite the rich array of explanations in the literature, the dominant view remains that the destructiveness of Milgram’s participants is a product of blind obedience to authority. However, we suggest that it can instead be understood as an act of engaged followership that flows from social identification with those in positions of leadership—leadership that is a source of “shared comprehension, consonance and synchronization”. In Milgram’s research, participants act as they do to the extent that they believe in, and hence are committed to, the scientific enterprise that the experimenter is leading more than they are committed to the well-being of ordinary members of the community as represented by the learner. Note, too, that Milgram went to great lengths to engender and promote this identification by emphasizing the scientific credentials and importance of the research (not least through careful design of apparatus and procedures).

“….After a long hiatus, during which ethical concerns made the systematic study of such phenomena impossible, new methods …and new technologies …have allowed experimental researchers to return afresh to the all-important questions that Milgram’s work raises.

“Accordingly, we are now in a position to renew theoretical debate in a field of research that was opened up by Milgram. Here, we provide grounds for one particular form of renewal. This moves us away from a dominant viewpoint that has prevailed within and beyond the academic world for nearly half a century—a viewpoint suggesting that people engage in barbaric acts because they have little insight into what they are doing and conform slavishly to the will of those in authority. Against this, and together with a growing body of historical and social psychological evidence, the present data move us toward the conclusion that agents of brutality act as they do under the influence of a leadership with which they are socially identified. To the extent that this identity is salient (and competing identities are not), this provides them with their moral compass. It also motivates them to act as followers, willing to do what it takes to work toward the collective goals that the leader sets out. Followership of this form is not thoughtless. It is the conscious endeavor of committed subjects.”

For more on Milgram, check out these links:

The Obedience Experiments at 50

Remembering (and Replicating) the Milgram Experiments