Publications > Observer > Observations > How We Decide 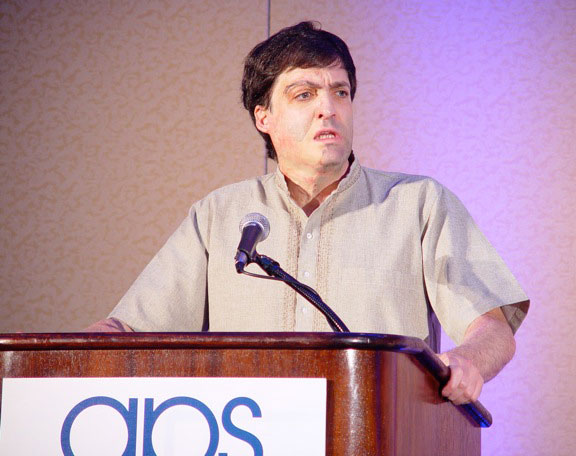 What decisions we make and how we arrive at them – those questions served as the backdrop for yesterday’s “Choices” theme program at the APS 23rd Annual Convention.

But the program’s four presenters answered these questions in surprisingly different ways. Dan Ariely of Duke University described the situations that lead people to make dishonest decisions. Given the chance, most people will cheat just enough to benefit from the opportunity but not enough to feel like a bad person.

However, Ariely has found that asking people to recall the Ten Commandments right before a situation where they might normally cheat causes them to play it straight — despite the fact that they could not recall all ten moral directives. “It’s not so much about God, it’s about reminding people of their own morality,” he said.

Neuroeconomist Antonio Rangel of the California Institute of Technology followed with a description of his field’s efforts to trace decision-making back to its neural roots. Rangel has scanned the brains of people engaged in  very basic decisions about the value of an item — an apples versus an orange, in one test — and found, again and again, that considering value activates the medial and orbital prefrontal cortex.

Sheena Iyengar of Columbia University opened the presentation of her work by asking a deceptively complex question: Why do we do things that go against our self-interest? Part of her answer is that we have some mistaken ideas of value. For instance, we believe that more choice is better. In one study, however, Iyengar found that people are six times more likely to buy jam when they are given only six options than when two dozens jars are presented in front of them. In a more serious case, people had a worse participation rate in retirement plans with many options than in those with fewer.

“So here you see, repeatedly, [cases in which] having more ended up leading to worse decisions,” Iyengar said.

Some people believe that poor people make worse financial decisions, but Eldar Shafir of Princeton University argued instead that conditions of scarcity often force bad decisions, even upon good decision-makers. In one study, Shafir made Princeton undergraduates “time poor” — that is, he gave them too little time to answer questions — and he found that they behaved just like financially poor people do when it came to taking a high-interest loan.

“Conditions of scarcity produce their own psychology and that psychology… leads to outcomes that are particularly problematic,” Shafir said.

Discussant David Laibson of Harvard concluded the program by identifying three areas of improvement psychologists could make to their work to become more involved in policy decisions that, too often, are based on the input of economists instead. He urged psychologists to perform more field studies to make their results generalize to a wider population, to concentrate on effect size in addition to providing the p-value (or statistical significance) of a
finding, and to consider more carefully the unintended consequences of their results.

“We’d all be better off if psychologists were much more present in Washington, and I greatly regret that when I think about the people advising the government, there seems to be a monopoly of economists,” Laibson said. “I’m counting on all of you to reverse that in the next decade or two.”

Publications > Observer > Observations > How We Decide