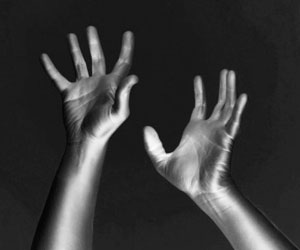 Close the doors, cover the windows, seal any cracks — the room is now pitch black. You can’t see anything…or can you?

New research from psychological scientists at the University of Rochester, Vanderbilt University, and Seoul National University in South Korea suggests that body movements, like waving your hand, can trigger visual sensations, even in the absence of visual information. That is, we may be able to “see” without actually seeing.

To conduct the study, the researchers recruited participants with and without synesthesia, a condition in which a stimulus generates an automatic response in more than one sensory system. People with grapheme-color synesthesia, for example, see certain colors when they read letters and numbers.

The participants sat in a dark room, while the researchers waved three different things in front of their faces — the participant’s own hand, an arm-shaped piece of cardboard, or the experimenter’s hand. Overall, synesthetes experienced stronger visual sensations in response to the movement than nonsynesthetes. And the perceived vividness of these sensations predicted how well participants’ eye movements tracked the self-generated hand movements in the dark.

These findings suggest that self-generated limb movements produce visual sensations that may function just like those typically derived from information that comes in through the retina.

According to the researchers, the findings show that the brain relies so heavily on prior experience that it can sometimes perceive things in the complete absence of the primary sensory input.

“My audition, my touch system, my visual system are all looking at the same world, says study coauthor Duje Tadin of the University of Rochester, “so it makes sense they are sort of working together to give me the best perception that I can get.”

You describe the ‘new’ research by Dieter, Hu, Knill, Blake, and Tadin (2013) who claim to have discovered that body movements like waving one’s hand from side to side in front of one’s covered eyes causes visual sensations of motion. Readers should know that this phenomenon was first described over 40 years ago by Hofstetter (1970) and that additional experiments, some similar to those reported by Dieter et al, confirmed the effect (Brosgole & Neylon, 1973; Brosgole & Roig, 1983).

Hoffstetter, H. W. (1970). Some observations on phantom visual imagery. American Journal of Optometry and Archives of American Academy of Optometry, 47, 361-366.

A sample of research exploring linguistic synchrony in providing emotional support, genetic contribution to variation in risk taking, and the role of biological motion in navigating a crowd. More