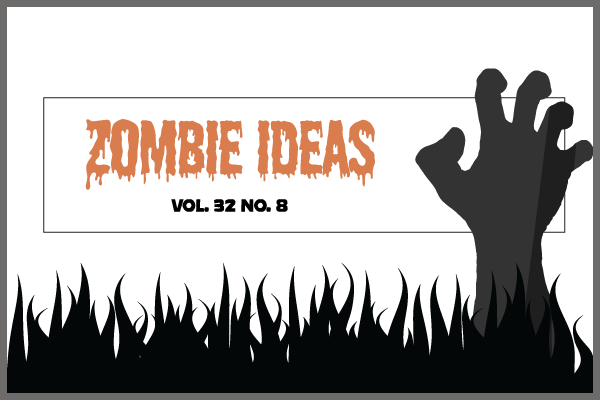 Hi APS members. I’m a zombie on the list of “Zombie Ideas” discussed in the October 2019 issue of the APS Observer. I appreciate the opportunity to make a case for my continued existence, and I hope you’ll hold off on beheading me while you hear me out.

Zombies (a.k.a. theories) are complex creatures. As with the other examples listed in the article, the description of me contained multiple distinct propositions, with additional propositions implied. For each zombie idea, the article invokes evidence that appears to refute one or two particular propositions (not always the stated ones), and concludes that the whole zombie must die. That seems premature.

First, part wrong does not equal all wrong when we’re talking about a complex, multiproposition theory. Second, I’m just one of a family of related zombies/theories, each with somewhat different features. When the data suggest one proposition is seriously flawed, it’s important to ask whether that proposition is a single family member’s toe, or a life-giving organ common to all. In my case (basic/discrete emotion approaches to facial expression), the proposition you acknowledged to be true is not only shared by my whole family ­— but it’s our heart.

Moreover, the data on which we have to base these life-or-death decisions are often weak. Weak data do not invalidate the entire theory; it just means you need additional kinds of data to test the propositions. Different methodologies have different strengths and limitations, and in many of the cases mentioned, they produce conflicting results. That seems like a questionable basis for executing someone.

Given all this, killing me now serves no purpose. I’m not here for you to kill or reprieve; I’m here to get you to ask questions. Test each part of me to see whether and how it works. Properly specified, some of your propositions will prove right, others wrong, and yet others in the ballpark but in need of adjustment. From time to time, it is important to step back and look at all the evidence, not necessarily to decide whether the zombie should live or die, but to see what parts of me still require study.

Something to consider: If people hold on to so-called zombie ideas, maybe it’s because there’s something useful about them; they pass a real-life “smell test.” That doesn’t mean scientists should endorse the popular view uncritically, but rather that it’s worth asking carefully what about the idea is so compelling, and which parts of it might be right as well as which are wrong (McGuire, 2013). If I’m still walking, it’s because my heart is still beating. I’m not dead, I’m just changing, and with time I’ll be an even better version of me.

APS Fellow Michelle “Lani” Shiota is an an associate professor of psychology at Arizona State University.