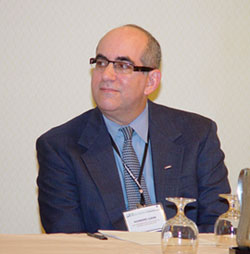 Don’t Ask Don’t Tell has been repealed, but what role did research have in the military’s decision to let gay service members serve openly? In an invited symposium, a panel led by Air Force psychologist Howard N. Garb discussed the impact of psychological science on military policies concerning gay service members.

The session featured a presentation by Laura L. Miller, a social scientist from RAND Corporation. At the beginning of her talk, Miller clarified some misconceptions:

“Historically, sexual orientation has not been a criteria for screening,” says Miller. After World War II, psychiatrists lobbied the military to implement psychiatric evaluations of recruits and screening for homosexuality became part of that process. According to Miller, the major argument for banning gays from the military at the time was that morale and unit cohesion would decline, but, she says, “This was asserted without any research or evidence.”

Miller also discussed the results of her own study, which was based on survey results from 545 military personnel. Her findings showed that 20% of the respondents knew someone who was gay in their unit despite the ban. More importantly, she found that knowing a gay or lesbian unit member did not impact the respondents’ cohesion or readiness assessments. Instead, she found that leadership, training and equipment quality were more critical.

“All these other things are what really matters for their quality of life, their well-being, their unit cohesion and effectiveness,” says Miller.

Following the talk, Emily Sussman, a policy associate from the Service Members Legal Defense Network, discussed the impact of research in making open service a reality. According to her, the argument for open service was strengthened by the research results, especially when the data indicated that the military was losing many skilled service members because of the ban.

“It was because of the research that was done by Laura Miller and others that this became a moving argument for us,” she says.

All of the panelists pointed out that there are many opportunities for psychological research as the military transitions to open service. For instance, researchers could track changing attitudes and stereotypes or investigate the impact of open service on military recruitment. Yet, they acknowledged that the challenges involved in studying military personnel have discouraged researchers.

“It is hard to do research in a military setting,” says Garb. “But there are very important psychology issues here and psychologists have had minimal involvement.”