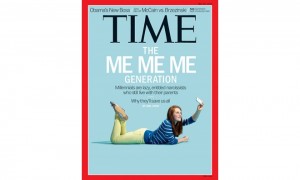 Young Americans have gotten a fair share of criticism in recent decades. College students in particular—and those leaving college to enter the work force—have been described as self-absorbed and entitled, grandiose in their sense of their own importance. For the harshest critics, it’s a generation of narcissistic brats.

I know. I know. It’s unfair and perilous to characterize an entire generation, and indeed this narcissistic trend has been disputed by some. There is also a lively debate about what might instill a grandiose self-concept in the minds of the young. Have they been spoiled by indulgent, overprotective parents, who lavished their kids with unearned praise?

Or perhaps it’s something else entirely, some uncontrollable social or economic force that’s shaping the minds of a generation. That’s the thesis of Emory University psychological scientist Emily Bianchi, who wondered if a roll of the economic dice—specifically, coming of age during a recession or in prosperous times—might influence on how narcissistic emerging adults ultimately become.

The theory is hard to resist. Economic recessions can be devastating for young adults. Lack of jobs, lack of decent pay, compromised careers—all of these outcomes can shape people’s lives, including their emotional lives, in powerful ways. Young adults are also very impressionable. Their sense of identity, their values and attitudes are all being shaped as they forge their own way beyond home and family. It makes sense that coming of age in times of scarcity—with humbling setbacks and bruising failures—might deflate the ego, or that prosperity might lead to self-focused individualism, which could morph into narcissism.

Bianchi decided to test this idea in three experiments using large, diverse samples of American adults. In the first, about 1500 adults—born between 1947 and 1994—completed an online survey. Bianchi used standard scales to measure narcissism and self-esteem. She used the national unemployment rate—when respondents were 18 to 25 years old—as an indicator of economic conditions in emerging adulthood. The unemployment rate varied from 4.4 percent to 7.7 percent. Those born in the mid-40s and late 70s came of age during the best of times; those born in the early 60s and late 80s, during the worst.

Bianchi crunched the numbers, and the findings were fairly dramatic. A high unemployment rate during emerging adulthood was linked to lower narcissism later in life, and each tick up in the jobless rate meant a significant corresponding drop in self importance. Economic conditions did not similarly predict self-esteem, considered a healthy adaptive response to adversity. So those who came of age during economic booms were not simply more confident and self-assured; they were excessively confident and self-satisfied.

That’s a key distinction, and Bianchi wanted to reexamine the relationship in a larger study. She used data previously collected in face-to-face interviews with more than 31,000 people, as part of a large health study. Bianchi again measured narcissistic traits, and sorted the respondents according to the unemployment rate during emerging adulthood. And again she found that people who came of age in the worst economic conditions were less likely to regard themselves as unique, special and deserving. This was true of both men and women and regardless of education.

So how do self-important attitudes play out in the real world? Bianchi decided to look at an actual behavioral manifestation of narcissism: how much CEOs pay themselves relative to others in the company. It’s known that narcissistic executives value themselves—and reward themselves—substantially more than the next most highly paid executive. Bianchi looked at this disparity as a clear and visible signal of heightened self-regard.

She studied more than 2000 CEOs from major publicly-traded companies in the U.S. during 2007. She picked 2007 because this was the last year before the financial crisis, and compensation decisions were less likely to be shaped by finances and public opinion. She gauged narcissism by the CEO’s salary, bonus and overall compensation package, relative to the next most highly compensated executive. On average, the CEOs in the study—more than 95 percent of whom were men–made 2.4 times the next most highly compensated exec.

The findings, reported in an article to appear in the journal Psychological Science, bolstered the earlier results. Entering adulthood in a floundering economy was linked to lower levels of narcissism—and relatively smaller paychecks—later in life. CEOs who came of age in the best of times paid themselves 2.26 times as much, in total compensation, as the next most highly paid executive. By contrast, CEOs who entered adulthood in tough times paid themselves 1.69 times as much.

So is diminished narcissism the silver lining of economic downturns? It depends on your point of view. Narcissists focus on themselves and their own goals, at the expense of others, and tend to alienate the people around them. So too much self-regard can be costly on a personal level. On the other hand, Bianchi notes, narcissists can be very smooth, at least in superficial relationships, which can be an advantage in the competitive world of work. If entering adulthood in good times makes young people feel entitled, it’s possible that they will do a better job advocating for themselves, which could lead to financial and career success.

As for the most recent generation of emerging narcissists, it could be that they owe their rising egoism to the long stretch of prosperity from late 80s through the 90s. If so, the Great Recession could predict a show of humility somewhere down the line.