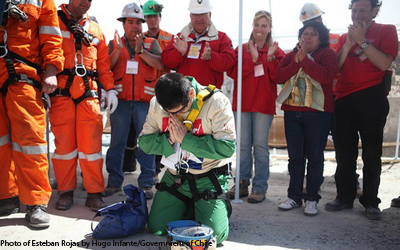 Even as we breathe a sigh of relief watching the rescue of 33 miners trapped in a Chilean mine for more than two months, there is recognition that their recovery from this traumatic experience involves more than just their physical health. Survivors of disasters are at significant risk for such problems as post-traumatic-stress-disorder (PTSD), depression, anxiety, and substance abuse. But research on the psychological effects of disasters indicates that the risk varies among individuals and, further, that the most common psychological interventions currently in use are at best ineffective and at worst may actually be harmful in some instances. Fortunately, there is strong scientific evidence pointing to the effectiveness of other psychological interventions for disaster survivors..

Following disasters, the most common form of immediate psychological intervention is a single session known as critical incident stress debriefing (CISD). However, following a review of studies on the effectiveness of CISD, Bonanno and co-authors conclude that “multiple studies have shown that CISD is not only ineffective but, as suggested earlier, in some cases can actually be psychologically harmful.”

“The data on crisis debriefing suggest that imposing such interventions on individuals doesn’t work and may, paradoxically, increase risk for PTSD,” Lilienfeld says. “If any of the miners want to talk to somebody to express their feelings, then by all means mental health professionals should be there to listen to them and support them. But for miners who would prefer not to talk much about the experience, it’s best to leave them alone and respect their own coping mechanisms.”

According to Bonanno and his co-authors, there are therapies that may be effective in helping survivors recover from disasters. Psychological first aid (PFA)—which, among other things, provides practical assistance and helps promote a sense of safety and calmness among survivors—is a promising approach. In addition, community-centered interventions—those that help maintain a sense of continuity, connectedness, and quality of community life—may be beneficial to survivors of disasters.

PDFs of Bonanno’s and Lilienfeld’s articles are available upon request: