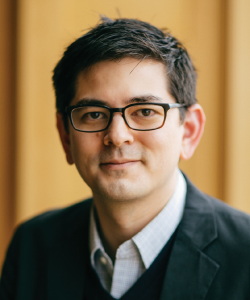 Please briefly describe your research interests.
My research is focused on understanding the psychological and neurobiological mechanisms underlying emotion and social interactions. For example, what are emotions and how do they affect our social interactions? How do we learn about others’ mental states, beliefs, and feelings? How do we encode, compress, and transmit this information to others? Our laboratory adopts a unique approach in addressing these questions.

We attempt to study emotions and social interactions using increasingly naturalistic experimental designs and rely on computational models to aid in quantifying and testing our hypotheses in these complex environments. Much of our work requires novel measurement and analytic techniques, and we are committed to developing open-source tools to aid in studying these social and emotional processes. Ultimately, we hope that our work will help improve our understanding of interpersonal relationships, dysregulation of affect in psychiatric disorders, and the mechanisms underlying the therapeutic effects of provider-client interactions.

What was the seminal event, or series of events, that led you to an interest in your award-winning research?
For as long as I can remember I have been fascinated by the beliefs and motivations that underlie human behavior, particularly why we (ever) do the right thing. The first time I remember the concept of research really clicking was during my senior thesis at Reed College, where I explored the motivations underlying academic dishonesty with Jennifer Henderlong-Corpus. After college, I read Descartes’ Error by Antonio Damasio and became obsessed with emotion, decision making, and the brain. This led me to seek out opportunities to work with Marcel Kinsborne during my master’s program at the New School for Social Research, and he connected me with his former student James Root. This ultimately led me to have an amazing opportunity to learn about neuroimaging methods from statisticians, engineers, physicians, and neuropsychologists while working as a research assistant in David Silbersweig and Emily Stern’s Functional Neuroimaging Laboratory at Cornell Weill Medical College. The idea that you could measure someone’s brain with fMRI while they were completing emotion tasks completely blew my mind, and I became consumed with learning everything I could about emotion, neuroimaging methods, and statistics.

Based on these experiences, I had the idea to combine my interests in clinical psychology with neuroeconomics, and I was incredibly fortunate to be admitted to the clinical psychology program at the University of Arizona where I studied neuroeconomics with Alan Sanfey and emotion with John Allen. Probably one of the most important experiences in my career was attending the Summer Institute in Cognitive Neuroscience on social neuroscience and neuroeconomics in Santa Barbara after my first year in graduate school. This is where I met many people who had a huge influence on my career trajectory (Tal Yarkoni, Mike Cohen, Catherine Hartley, Leah Sommerville, and many more). I was so inspired by the topic that immediately upon returning home, I reached out to all of the economics, psychology, and neuroscience students there and started a neuroeconomics journal club. After a few meetings, the only person that kept showing up was Alec Smith, an economics grad student who was working with Martin Dufwenberg — a pioneer in psychological game theory. This led to a long-standing collaboration developing projects that combined game theory with neuroimaging to study social emotions such as guilt and anger.

I also was exposed to reinforcement learning theory by Michael Frank and I learned the basics of this type of modeling approach working with Brad Doll, which led to my first social computational paper on how people learn to trust others. During my clinical training, I developed an unexpected interest in couples and family dynamics working with Varda Shoham and Michael Rohrbaugh, and I had several unique opportunities to study behavioral medicine, where I became interested in the relationship between somatization, such as pain, and relationship dynamics. To align my clinical and research interests, I sought out a postdoc with Tor Wager at the University of Colorado and had an amazing opportunity to spend a lot of time learning advanced statistics, neuroimaging methods, and software development. This is where I was first exposed to hackathons, Python, and open science working on extensions to neurosynth with Tal Yarkoni. Ultimately, these experiences had an enormous impact on my career trajectory and general perspective on science.

Tell us about one of the accomplishments you are most proud of within this area of research. What factors led to your success?
There is one paper that I am particularly proud of at the moment that I think provides the best example of how our laboratory attempts to approach science. The paper is currently available as a preprint (biorxiv.org/content/10.1101/487892v1), and I hope it will inspire new directions in affective research.

The predominant approach to studying emotion in neuroimaging is to evaluate how the brain responds to different stimuli that contain emotional content. This approach has limitations because it assumes that these stimuli reliably elicit emotional experiences and that these experiences are shared across all participants. However, these assumptions seem unlikely to be met, in that each individual has unique experiences, homeostatic needs, and goals that will influence how these stimuli are interpreted and ultimately experienced. If our hypothesis is true, then we would expect that regions involved in the generation of emotional experience should show the least consistency across participants.

To explore this question, we used a naturalistic experimental paradigm and scanned participants while they watched a pilot episode of a character-driven television drama. We looked for evidence of synchronization in the ventromedial prefrontal cortex (vmPFC), a region that has been implicated in the generation of appraisals that give rise to emotional experiences. Consistent with our hypothesis, we found little evidence of between-participant synchronization in vmPFC activity in space or time. However, a null result in itself is not particularly convincing, so we sought to figure out why there was no synchronization. To do this, we examined the dynamics of patterns of activity in this region within a single participant over the entire episode. We noticed an interesting and unexpected pattern: The vmPFC appears to persist in a single state for relatively long periods of time, on the order of minutes, and then transitions to another state, bouncing back and forth between only a few different states. Surprisingly, this general pattern was present in all of the participants, but the specific transition structure was completely unique to each participant.

Using a computational framework, we were able to demonstrate that these states were associated with spatial patterns in the vmPFC that were consistent across people but rarely aligned in time. The time points exhibiting the greatest synchrony turned out to be the scenes with the most positive and negative emotional valence, each of which reflected a distinct vmPFC state. We replicated this finding in an independent sample, and we provided additional converging evidence that these scenes were associated with the strongest emotional experiences by measuring facial expressions and self-reported feelings in separate samples of participants viewing the same episode outside of the scanner.

I am particularly proud of this project because the entire finding emerged from noticing an anomalous pattern in the data in a single subject and attempting to figure it what it might mean. I think this is particularly important to note because unexpected “discoveries” cannot be preregistered. In addition, most of the analyses and techniques used in this project are currently unavailable in standard neuroimaging software packages and were developed by our laboratory using open-source Python toolboxes. The development of novel methods is a critical aspect of science because it permits testing new experimental questions, and I hope the field of psychology will move toward incorporating these practices into its training curriculum.

Finally, this type of work was only possible through a collaborative team and I am incredibly fortunate to be able to work with amazing undergraduates (Nathan Greenstein), graduate students (Eshin Jolly, Jin Cheong, Kristina Rapuano), postdocs (Andy Chen), and faculty colleagues (Jeremy Manning), who all contributed to developing new ideas and scientific tools for this project, including building hardware and software to record and synchronize facial expressions, developing web applications to record multidimensional subjective feelings, and implementing algorithms from other fields such as hidden Markov models, hyperalignment, and collaborative filtering.

What contributions, or contributors, to psychological science do you feel have had a major impact on your career path?
I have been incredibly inspired by many creative scientists who adopt interdisciplinary approaches and are passionate about improving science, developing methods, mentoring others, and providing vision for the field. There are too many to name, but a few examples of people who demonstrate these ideals and have particularly inspired my career trajectory are Read Montague, Tor Wager, John O’Doherty, Russ Poldrack, Jonathan Cohen, Paul Glimcher, Tim Behrens, Uri Hasson, and Elizabeth Phelps.

Without question, the largest impact on my career trajectory has come from my amazing colleagues, who have all served as my personal tutors, intellectual sparring partners, career counselors, emotional support, and professional advocates—Tal Yarkoni, Alec Smith, Brad Doll, Mike X. Cohen, Thorsten Kahnt, Catherine Hartley, Leah Sommerville, Dominic Fareri, Hedwig Eisenbarth, James Cavanagh, Chad Forbes, Drew Fox, Filippo Rossi, Thalia Wheatley, Meghan Meyer, Matt van der Meer, and Jeremy Manning. Finally, the person who has single handedly had the largest impact on my career trajectory, from teaching me how to make my first academic CV to editing my papers and encouraging me to take risky decisions and move all over the country, is my amazingly supportive wife Eunice Lee.

What questions do you hope to tackle in the future?
Our laboratory has spent the past few years developing a collection of new methods to study real-time social interactions using web applications, mobile apps, wearable sensors, language, and facial expressions. We are excited to use these tools to tackle many understudied questions pertaining to group decision making, belief transmission, conversation, collective memory, shared affective experiences, and gossip.

What does winning this award mean to you both personally and professionally?
Though I have never had any formal training in math or computers, I have had a long-standing vision to use computational approaches to study social and affective processes since the beginning of my research career. Combining theory and methods from diverse fields can be exciting when it leads to innovation. However, interdisciplinary research also has a lot of challenges such as developing expertise and learning cultural norms in multiple fields, finding venues to publish this work, and appeasing reviewers with completely different perspectives. In addition, it can be difficult to find a good fit in graduate programs and faculty positions; departments are often reluctant to take a risk on someone who doesn’t fit cleanly into traditional research areas. Receiving this award is particularly meaningful to me because it signals that our field values interdisciplinary research, which I hope will make it easier for the next generation of scientists to push further into unexplored directions. It is truly an honor to be considered among such talented and accomplished scientists and be associated with the memory of such an inspiring and pathbreaking scientist as Janet Spence.