How Media Can Encourage Our Better Side

Violent media—films, TV, videogames—can encourage aggression, and lots of research says so. But psychologists haven’t spent as much time looking at the ways media with more socially positive content help suppress meanness and prod us toward cooperation, empathy, and helpfulness. When and why might a game or a movie mobilize More

Is TV Teaching Kids to Value Fame Above All?

TIME: Is fame more important to tweens than it used to be? A new study suggests that young kids of this decade are vastly more familiar with and are more likely to value individualistic personality traits like fame, achievement and wealth than kids of past eras — way back before More

Washington Post: Children ages 3 to 5 who watched violent or scary content on television, or watched TV in the evening, are increasingly likely to have nightmares, trouble falling asleep or other sleep issues, a study says. The researched published in the journal Pediatrics also revealed that kids who had More

“The Young Ones” nominated for BAFTA

Harvard Gazette: “The Young Ones,” a BBC series filmed with Harvard Professor of Psychology Ellen Langer, which replicates her Counterclockwise study using British celebrities, has been nominated for a British Academy of Film and Television Awards (BAFTA) Award. The BAFTAs are the British equivalent of the Emmy Awards. The awards More

The truth is, we all lie. That’s a basic assumption of the new television series “Lie to Me,” which follows human lie detector Dr. Cal Lightman (played by Tim Roth) as he attempts to solve criminal cases by finding the truth in suspects’ minute facial expressions and gestures.  Lightman is More 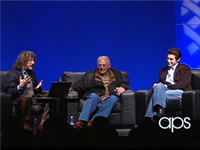