In Defense of Superstition

The New York Times: Superstition is typically a pejorative term. Belief in things like magic and miracles is thought to be irrational and scientifically retrograde. But as studies have repeatedly shown, some level of belief in the supernatural — often a subtle and unconscious belief — appears to be unavoidable More

The Economist: One stereotype of wisdom is a wizened Zen-master smiling benevolently at the antics of his pupils, while referring to them as little grasshoppers or some such affectation, safe in the knowledge that one day they, too, will have been set on the path that leads to wizened masterhood. More

Daily Mail: Children know the difference between right and wrong before they reach the age of two, according to new research published today. Scientists have found that babies aged between 19 and 21 months understand fairness and can apply it in different situations. They say it is the first time More 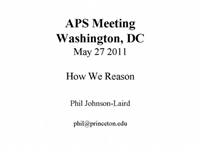 The Realities of Reason

Reasoning is an ability that comes naturally to most people, and this can be demonstrated, according to psychological scientist Philip Johnson-Laird, by the world-wide popularity of Sudoku puzzles. While some people might be better at them than others, the whole point of Sudoku puzzles is that people can solve them More

CNN Health: We’ve all heard the adage “you can’t teach an old dog new tricks.” But new research reveals that you CAN teach an older adult how to improve their brain skills, with the added effect of changing a personality trait, making them more open to new experiences. Using subjects More

Prejudice Is A Basic Human Need

Science 2.0: Prejudice is just bigotry that arises from flawed ideology, right? Not so, say the authors of a new paper. They contend prejudice stems from a deeper psychological need and it is associated with a particular way of thinking. People who aren’t comfortable with ambiguity and want to make More