Animals and Androids: Associations Between Social Categories and Nonhumans

People view social groups as “less than human” in two very distinct ways according to an article published in the February issue of Psychological Science. New research from Stephen Loughnan and Nick Haslam at the University of Melbourne suggests that people often perceive social categories as either lacking characteristics that More 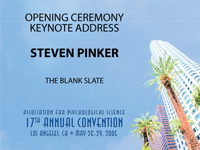 Alternative Futures for Our Science

This article is adapted from Walter Mischel’s talk at the plenary session on “The Future of Social-Personality Psychology,” presented at the annual conference of the Society for Personality and Social Psychology, January 20, 2005, in New Orleans. When I think about the present and future of the field of social More

Consequences of Person-Environment Fit Across Contexts: We Are Where We Live

Toward One World of Psychological Science

Editor’s Note: In the May/June issue, a column by Bjork and Ceci listed several individuals involved in developing reports for APS’s new journal, Psychological Science in the Public Interest. The editorial team led by Keith Raynor (investigating the question “what is the most effective way to teach reading for various More