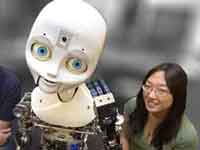 Can You Trust Nexi?

People face this predicament all the time—can you determine a person’s character in a single interaction? Can you judge whether someone you just met can be trusted when you have only a few minutes together? And if you can, how do you do it? Using a robot named Nexi, Northeastern More

Read about the latest research on social cognition published in Psychological Science. Reading Between the Minds: The Use of Stereotypes in Empathic Accuracy Karyn L. Lewis, Sara D. Hodges, Sean M. Laurent, Sanjay Srivastava, and Gina Biancarosa Do stereotypes help us determine what people are thinking? Participants watched a movie More

At the core of many governing failures is an inability to compromise. This general intransigence was best captured by US Representative John Boehner (R-Ohio) during a late 2010 interview on “60 Minutes” with Lesley Stahl. Boehner had recently been elected as Speaker of the House of Representatives, and he was More

Why Can’t We Be Friends?

Political fervor in the United States is at its peak as the end of the 2012 Presidential Election approaches, and APS Fellow Jonathan Haidt, from New York University’s Stern School of Business, has been patiently observing the fray. Haidt investigates the psychological bases of morality across different cultures and political More

Study of the Day: When Teamwork Isn’t Democratic, Everyone Benefits

The Atlantic: PROBLEM: Though many believe that equality within a team is important, does this flat power structure really improve a group’s performance? METHODOLOGY: Researchers led by Richard Ronay randomly assigned 138 undergraduate students to one of three experimental conditions — primed to feel high in power, low in power More