According to traditional intelligence paradigms, intelligence peaks around the age of 25. Discouraging news for the 26 and over set. But take heart: APS Fellow and Charter Member Phillip L. Ackerman argues for a new definition of adult intelligence and he has an impressive body of research to support it. More

On Being a Couple in Psychology

“I’m looking for Dr. Gardner,” Ellen said to the distinctly rumpled back of a young man bending over getting something out of a file cabinet. He stood up, turned around, and said “I’m Dr. Gardner.” The messy-haired man was Howard (some things never change). It was the summer of 1973 More 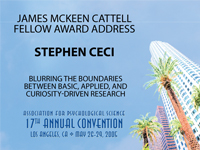 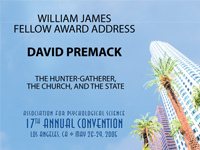 David Premack, University of Pennsylvania, received the 2004-2005 APS William James Fellow Award at the 17th APS Annual Convention for his outstanding lifetime of significant intellectual contributions to the basic science of psychology. Premack accepted the award, saying, “Getting awards is a tricky business. But there’s really only one rule More

Quintessential Scientist I met Lloyd Humphreys during the first week of a three-year post-doc (quantitative methods training program, University of Illinois, 1987-1990). Soon we began meeting regularly, and I came to appreciate Lloyd’s extraordinary, brilliant mind. His wide-ranging command of applied research, psychometrics, and the study of individual differences left More