The perils of ‘having it all’

It’s fair to say that Thurston Howell III doesn’t savor the little things in life. One of seven castaways on an uncharted Pacific island, the WASPy billionaire never stops scheming to get back to his money. While the others often seem content in their tropical paradise, Howell mostly likes to More

Imagine you are a high school basketball player, and a pretty good one. You are a senior, and right now you are the starting point guard for the Rochester Eagles. Last year you started for the Lexington Cougars, in a different state, and the year before that you played the More

A sick or sad child might cling to mom’s leg. But that same child – fed, rested and generally content – will happily toddle off to explore every nook and cranny of the known world. Or: You’re chipper and you decide to check out the new restaurant across town. You’re More 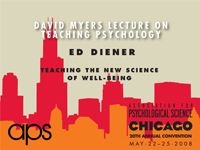 Ed Diener is a happy man. In happiness ratings of over 80 psychologists, he came in first (never mind that he had read the study detailing what makes a happy autobiography before writing his own). His new book is called Happiness and his position at the University of Illinois is More 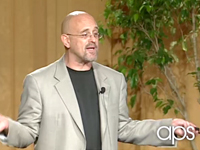 Aiming at Happiness and Shooting Ourselves in the Foot

Let it not be said that psychological science doesn’t ask the big questions. You know — big questions, like: Which is better, a Snickers bar or a bag of chips? What does raising children have in common with a no-hitter in baseball? And, how valuable is a pair of Armani More

Happy in Spite of Ourselves

Fans of the long-running TV sitcom Seinfeld will remember the episode in which Jerry realizes he is “Even-Steven.” Everything in his universe balances out. He has an important work gig cancelled, but before he can wallow in his disappointment a different opportunity unexpectedly presents itself. He loses a $20 bill More