Two languages walk into a bar

Macleans: Samir Khullar, the smarmy, potty-mouthed comedian who goes by Sugar Sammy, has a joke about the NDP in his new show. “Their slogan was ‘Working Together,’ ” he says, referring to the party’s unexpected breakthrough in Quebec in the last federal election, “but once they won it became ‘Holy More

No Bad Luck This Friday Unless You Think it Will Happen

Have you watched the movie Friday the 13th? Scary, isn’t it? Well, perhaps not quite as scary as the infamous Rebecca Black song, “Friday” – but close enough. If you are one of those who carries around a rabbit’s foot and strokes it all day long for good luck or More 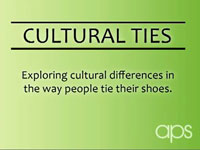 When a child learns to tie her shoes —perhaps using the “bunny ears” method or the “squirrel and the tree” — her parents probably don’t think of the lesson as a moment of cultural reinforcement. But in the midst of a debate over culture and cognition, a group of five More

Here’s a puzzler for you — what does the acronym IUPsyS stand for? No points for getting the “Psy” part (and here’s a hint: IU is not Indiana University). Give up? IUPsyS is the International Union of Psychological Science. It was founded in 1951 and currently has membership representing 70 More

Your Complicated Amygdala: Why Brain-Imaging Work Is Misleading

The Atlantic: Brain-imaging studies have been painting an overly-simplistic picture of the how the brain works. It has even filtered into TV programming. In one episode of a popular legal drama, a character claimed to have figured out that a policeman was racist because his amygdala activated whenever he was More

Evidence-based psychotherapy should work the same for everyone, right? Wrong. In his research, Joseph P. Gone of the University of Michigan points out that the latest treatments developed by psychological scientists can’t be applied to all communities in exactly the same way. Gone is interested in how evidence-based mental health More