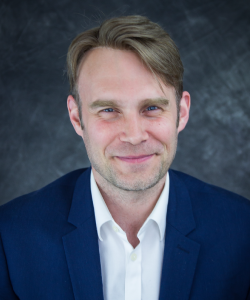 Please briefly describe your research interests.
Every day we make hundreds of decisions about when and how to invest our effort to best achieve our goals. This process is so fundamental yet poorly understood. How does the brain adjudicate between all the competing options and opportunities with which we are faced? This question has long fascinated me as a cognitive neuroscientist and remains a central focus of the lab. As a clinician, however, I have been even more intrigued by how this process breaks down in mental disorders. I have sat across from numerous depressed patients who tell me that they are too unmotivated to get out of bed or even walk across the room to answer the phone. How does this happen? What is altered in these effort-based decision making circuits when people become stressed or depressed that makes routine tasks seem impossibly overwhelming? These are the questions that drive my research program.

What was the seminal event, or series of events, that led you to an interest in your award-winning research?
There are too many to recall. I graduated from college with a degree in music theory and little clue as to what I wanted to do with my life. My interest in psychology coalesced when I began a personal mindfulness practice after graduating and became very interested in Buddhist psychology. This grew strong enough to convince me that I wanted to devote my life to studying the mind, but I wasn’t sure where to start. I re-enrolled at my undergraduate institution as a continuing-education student and began taking psychology classes. This was back in 2004, and the use of fMRI in affective neuroscience was just in its infancy. One of my first courses presented a study that used fMRI to study emotion regulation. I was deeply intrigued but also intimidated. I hadn’t studied biology or chemistry since high school, and it seemed like a herculean task to try to catch up. I decided to forge ahead, and I think this willingness to move into areas where I was uncomfortable has been a real benefit in my career. Many of the methods and background knowledge that informs my current research program, such as neuroimaging, computational modeling, and immunology, seemed very daunting when I first encountered them.

Tell us about one of the accomplishments you are most proud of within this area of research. What factors led to your success?
When I began working in the area of anhedonia and reward motivation as a graduate student, I noticed that the majority of studies on the neural mechanisms of anhedonia in humans posited a role for altered mesolimbic dopamine (DA) but relied on measures of anhedonia that focused almost exclusively on assessment of hedonic responses to positive events. This seemed counterintuitive, given a large basic science literature suggesting that manipulations of DA had little direct effect on hedonic response to rewards but was instead critical for approach-related behavior and the willingness to exert effort in pursuit of rewards.

To address this mismatch, my graduate advisor, David Zald, and I worked to develop a novel behavioral paradigm that could be used to assess the motivational aspects of anhedonic symptoms. One of our primary goals was to create a measure that could show translational parity with results from the preclinical effort-based decision making. The resulting task has since helped characterize motivational behavior across a wide range of psychological disorders, has been incorporated as a secondary end point for both industry-funded and NIH-funded clinical trials, and has been listed as a recommended measure by the NIMH RDoC initiative. More broadly, I think this work has also helped raise the profile of motivational impairment as a critical construct that needs to be better understood as we seek to improve prevention and treatment for mental health disorders

What contributions, or contributors, to psychological science do you feel have had a major impact on your career path?
I’ve had remarkable good fortune in my scientific collaborators and mentors. When I first switched into the field of psychology in the latter half of my 20s, I was somewhat of a “dark horse” candidate for graduate school given my nontraditional background. I was fortunate then, as now, to have found the support and guidance of mentors who were willing to take a chance on me. This included Sara Lazar and the late Dan Wegner, who offered me my first RA positions, and Merida Grant, who gave me my one (and only) acceptance to graduate school. Later on in my graduate training, I transitioned into the lab of David Zald, who helped me develop my early ideas regarding the role of the mesolimbic dopamine system in motivational impairments in mental illness. While at Vanderbilt, I was also supported by an outstanding team of teachers and mentors, including Rene Marois, Steve Hollon, Andy Tomarken, Sohee Park, and Judy Garber. It was also in David’s lab that I had the unbelievable good fortune to work alongside Josh Buckholtz, who remains one of my closet friends and greatest scientific benefactors.

One of the challenges of studying a phenomenon such as clinical depression is the need to develop deep clinical knowledge and skills in addition to cognitive neuroscience expertise. To this end, my research has benefitted enormously from the incredible clinical training and supervision I received from Denise Davis, David Treadway, Thröstur Björgvinssion, and the entire clinic staff at the McLean Hospital Behavioral Health Partial Program.

Following my clinical internship year, I was fortunate enough to join a new affective neuroscience center at McLean Hospital led by Diego Pizzagalli. In addition to receiving phenomenal guidance and mentorship from Diego, I had the opportunity to work closely alongside an amazing cast of colleagues and collaborators, including Dan Dillon, Poornima Kumar, Roee Admon, Rosi Kaiser, Christian Webb, and the late Eric Jensen.

Finally, since coming to Emory as a freshly minted junior faculty member in 2015, I have received unwavering support from the faculty in the departments of psychology and psychiatry, including Scott Lilienfeld, Irwin Waldman, Elaine Walker, Patty Brennan, Sherryl Goodman, Ed & Linda Craighead, Danny Dilks, Stella Lourenco, and Phil Wolff in psychology, and Andy Miller, Ebrahim Haroon, Jennifer Felger, and Zhexing Wen in psychiatry. During this time I’ve also been graced with a wonderful group of talented young scientists in my lab who have done much of the heavy lifting over the last few years.

What questions do you hope to tackle in the future?
A core question in clinical psychology is why some people develop mental illness and others don’t. Even when equating for a host of external and internal factors, individual differences predominate. While my early work focused on the possible role of dopamine dysfunction in the pathophysiology of motivational deficits in depression, a nagging question had always been why the dopamine system was vulnerable in a subset of depressed patients. A recent set of studies begun since I joined Emory have focused on the role of the immune system in altering dopaminergic reward circuitry. Most recently, this line of work has included the adoption of an induced pluripotent stem cell (IPSC) model to identify personalized genetic vulnerabilities to the effects of inflammation on IPSC-derived neurons. I think this type of approach has tremendous potential for bringing the “precision medicine” revolution to the field of mental health.

What does winning this award mean to you both personally and professionally?
Treadway: I was relatively late in coming to the field of psychology, and I had strongly considered a wide variety of other career options. By the time I figured out that those careers weren’t a good match, I was already 5 years out of college. Choosing to re-enroll in undergraduate courses and begin the two-year process toward graduate admission felt like a risky bet at the time, and an award like this represents a moment of validation that feels very meaningful to me. It’s also an opportunity to reflect on all the personal support and love I’ve received my parents, my brother Sam, my brilliant and loving wife Nicole, and a community of incredibly generous and caring friends and colleagues over the years.