The Conversation: Let’s try you. Read the title above once, then cover it and write down word for word what you remember. Having difficulties? How well you do may be down to which country you live in. That’s according to a new study, published in Psychological Science, involving an impressive More

Women’s cognitive functioning past middle age may be affected by the degree of gender equality in the country they live in, according to new findings from Psychological Science, a journal of the Association for Psychological Science. “This research is a first attempt to shed light on important, but understudied, adverse More

Turning the “Motherhood Penalty” into a “Breadwinner Bonus”

Working mothers are often offered lower salaries and fewer leadership opportunities compared to working fathers, but this penalty can be reduced by framing women as “breadwinners.” More

Across her groundbreaking career, Janet Taylor Spence, who died in March 2015 at the age of 91, was both an inspired researcher and an influential leader. Spence’s many contributions to the field of psychological science were honored in a special symposium organized by APS Past President Kay Deaux and Lucia More 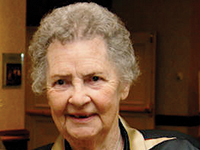 Recorded in May 2016 at the 28th Annual Convention of the Association for Psychological Science, Chicago. More