A major function of speech is the communication of intentions. In everyday conversation between adults, intentions are conveyed through multiple channels, including the syntax and semantics of the language, but also through nonverbal vocal cues such as pitch, loudness, and rate of speech. The same thing occurs when we talk More

Many animals, including humans, frequently face the task of getting from one place to another. Although many navigational strategies exist, all vertebrate species readily use geometric cues; things such as walls and corners to determine direction within an enclosed space. Moreover, some species such as rats and human children are More

It’s Not all the Parent’s Fault: Delinquency in Children Now Linked to Biology

How do sweet children turn into delinquents seemingly right before our eyes? A unique study appearing in the June issue of Psychological Science, a journal of the Association for Psychological Science, shows that, in children, a highly reactive autonomic nervous system, which regulates our cardiovascular, digestive and respiratory functions, paired More

Monkeys’ Ability to Reflect on their Thoughts May Have Implications for Infants, Autistic Children

New research from Columbia’s Primate Cognition Laboratory has demonstrated for the first time that monkeys could acquire meta-cognitive skills: the ability to reflect about their thoughts and to assess their performance. The study was a collaborative effort between Herbert Terrace, Columbia professor of psychology & psychiatry, and director of its More 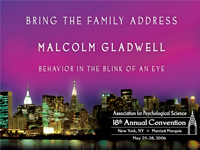