April 2 is World Autism Awareness Day, recognized by the United Nations General Assembly for the purpose of improving the lives of people living with autism. According to the organization Autism Speaks, autism affects 1 in 88 children; however, scientists are still working to understand the causes of autism-spectrum conditions More 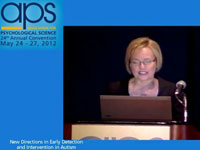 The Washington Post: The now familiar term “Asperger’s disorder” is being dropped. And abnormally bad and frequent temper tantrums will be given a scientific-sounding diagnosis called DMDD. But “dyslexia” and other learning disorders remain. The revisions come in the first major rewrite in nearly 20 years of the diagnostic guide More

CNN: Starting next year, the process of diagnosing autism may see drastic changes following the revision of the official guide to classifying psychiatric illnesses. After years of reviewing and refining criteria used by psychiatrists and other experts to diagnose mental health disorders, the American Psychiatric Association board of trustees on More