The APS Student Caucus (APSSC) held a host of events designed to get aspiring psychological scientists engaged and connected. It began with the Student Social held at Uptown Tap House in Washington, DC, during which students enjoyed drinks, music, dancing, and an opportunity to mingle with their peers before the More 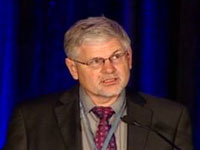 Multitasking in the Automobile

David L. Strayer has spent more than a decade studying the fundamental factors that impair drivers and lead to automobile accidents. Some distractions — like talking or texting on a smartphone — are already widely recognized as dangerous. But much of Strayer’s work focuses on cognitive distractions that occur even More

A Legend in the Study of Rumination

Susan Nolen-Hoeksema of Yale University, a pioneer in the field of rumination, died in January at the age of 53 following heart surgery. A half dozen speakers — many of them scientific and academic protégés, and many of them choking up at times — gathered at the 25th APS Annual More

When Paul Meehl died 10 years ago, he left behind a rich legacy of scientific thought. He was not only professor of psychology at the University of Minnesota; he also taught psychiatry, philosophy, neurology, and law.  Meehl influenced research in a range of areas, from psychiatric classification to psychometric assessment More

J. Richard Hackman spent nearly a half century exploring the dynamics of teamwork and effective leadership, leaving an indelible mark on the field of organizational psychology. Hackman, a 2013 APS James McKeen Cattell Fellow, passed away in January, and a few of his former students and collaborators gathered at the More

New Frontiers in the Science of Positive Emotions