Steps Toward a Science of Well-Being

Are you happy right now? Is reading this article an enjoyable use of your time or are you already reaching to turn the page? What about your life in general? Are you satisfied? Daniel Kahneman wants to know. For the last 10 years, he has been working to develop a More

Eating into the Nation’s Obesity Epidemic

“What product does the slogan ‘Melts in your mouth, not in your hand’ belong to?” Kelly Brownell challenged his listeners. They chuckled and shouted in unison “M&Ms.” The audience hadn’t expected a pop quiz when coming to hear Brownell’s invited address, “Changing the American Diet: Real Change Requires Real Change,” More

It goes without saying that childhood sexual abuse is often a traumatic experience. Add to that revisiting the abuse in courtroom testimony, and a complex picture emerges about the full impact the abuse can have on a victim. In her invited address at the APS 18th Annual Convention, “Childhood Trauma More

Have you ever been driving through busy streets, listening to the radio, and suddenly realized you had no recollection of driving the previous 14 blocks? All of the turns you made, the abrupt halts, the traffic cop, had been absorbed by some part of your brain separate from your conscious More 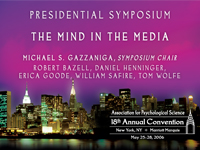 Presidential Symposium: The Medium Is Still the Message

“Can we talk?” Joan Rivers’ signature catchphrase is something psychologists might consider adopting, at least according to a panel of eminent journalists talking about “The Mind in the Media” at the APS 18th Annual Convention. For the audience, it was in part an object lesson in the disconnect between the More

A Learning Machine: Plasticity and Change Throughout Life

Drawing together five psychological scientists unlikely to cross paths outside of a conference, one of the APS 18th Annual Convention’s themed programs, “Plasticity & Change: A Lifelong Perspective,” showcased extraordinary research from various areas, all suggesting that the brain is almost infinitely adaptable from earliest infancy through latest adulthood Although More